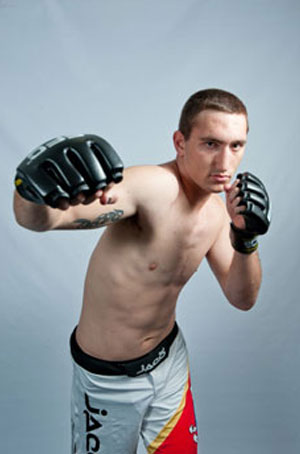 EFC AFRICA caught up with welterweight MMA athlete Josh Muller in the lead-up to his fight at EFC AFRICA 08. Coming off a win in his pro debut, Muller is confident he can repeat the performance when he faces DRC’s Francois Kabulu. As usual, Muller had a lot to say and we were only too pleased to jot it down for the fans. EFC AFRICA now presents Josh Muller’s thoughts on:

Team mate Alex Cheboub fighting Mark Jones at EFC AFRICA 08
I hope I’m fighting first because then I get to choose whether I take KO of the night or submission of the night. I think I’ll finish my fight quickly so that I can get backstage and help Alex prepare for his. In the grand scheme of things, his fight is much more important than mine because another victory will help him get a title shot. Alex will beat Mark. He’s faster, bigger and stronger. He’s a damn gorilla, the guy deadlifts something like 205kg. I have no doubt that Mark has the ability to hurt Alex in this fight, but there is no way he can beat him.

Fighting Francois Kabulu at EFC AFRICA 08
I don’t know enough about Francois to put a proper strategy together but I thought I saw him do a single leg takedown on Ashley during their fight, and his G’nP was pretty good. If he tries to take me down I’ll probably let him, it’ll be a short night for him. I assume he’s a good K1 fighter since he trains with those insane guys over at Panther Fighting Arts. On this topic, can I just say I love watching Gina Ifuki fight? He’s so entertaining! He’s extremely high-risk and he needs to work on takedown defence but he’s one of my favourites and I hope he starts winning. Ok back to Francois. Yeah maybe I’ll stand in the pocket and trade with him. Have you lost your mind?! No, that’s not going to happen. I’m going to shoot fast and shoot early. Although, judging by some of the comments on Fight Republic (www.fightrepublic.co.za) some people doubt my gas tank so I do also want to drag Francois into the fight to prove a point. What I can say is that for each fight, my conditioning reaches a new peak, so one day I’ll be Frankie Edgar. Luckily for Dirk he won’t need to speak any French after this fight because he’s going to be interviewing the winner, me. 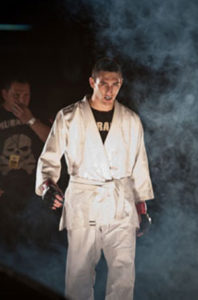 Being a part of Godfather MMA
Even though I teach from home I am still very much a part of Godfather MMA. We’re taking over. Recently Godfather MMA and Jedi Temple MMA took a few students to a grappling tournament in Pretoria a few weeks ago and we cleaned the place out. We won something like 14 of the 16 medals. One of the most interesting fights was between one of my students and one of my coach Brad Bloch’s students. It was very weird; we were having our own contest screaming instructions at our fighters. Mine was ahead on points but his won by armbar. Godfather MMA is moving to Casa de Vale Tudo in Sandton which means a bigger facility with better equipment and more. People don’t yet understand what I mean when I say Godfather MMA is taking over! And please watch this space for Daniel Butler, EFC AFRICA’s future middleweight champ.

Being an MMA instructor
I teach classes from home, I’ve been doing it since the middle of last year and it’s grown to the point where it needs a name, so I am now the head of Jedi Temple MMA. I had 2 students last year but the way it really kicked off was a few months ago at Godfather MMA. I was training with my strength and conditioning coach Gavin Smith when these two moms from King David school walked in asking for an instructor. The one they wanted wasn’t there but I mentioned that I was a pro MMA athlete. They had no clue what that was and I was forced to use a word I hate; ‘cage fighter’. They still had no idea so Gavin was like ‘ok you know EFC AFRICA?’ and their faces just lit up. I’ve got 16 students now, Jedi Temple MMA spreads by word of mouth and I love teaching. 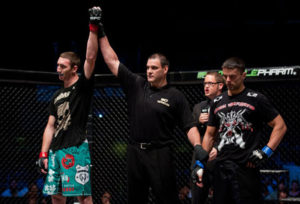 Self-promotion and managing social media profiles
I’m very much a self-promoter, mainly because I don’t have a PR person that follows me around. Recently, I’ve convinced the Jewish Report and a few websites to interview me, and I was invited to a UJ FM interview but I can’t remember who invited me… Then my Facebook fan page is coming along; I had a lot more fans when I was Josh ‘Iron Man’ Muller but then I started a new ‘Jedi’ fan page and couldn’t move the fans across. I’m getting good feedback, especially on Twitter. The way I see it, whether I have 1 follower or 1000, I’ll tweet the same, there’s no point waiting and it’s the only way to grow. I just keep forgetting to plug my profiles in the interviews I do! Not this one though.
http://www.facebook.com/pages/Josh-The-Jedi-Muller/149560401764204
@JediJoshMuller on twitter

The need for sponsors in the life of a full-time MMA athlete
I’d been looking for a supplement sponsor for ages, but no one returned my calls. So, when Dave da Costa called me about a Training Day sponsorship, I decided then and there that I would accept on principal, because of the professionalism and obvious care that he had for sponsored fighters. After trying the products they turned out to be the best things I could take.

Another sponsor, Top Notch Brands did amazing things to hook me up with clothing: Kimurawear and Dirty Boxer. The Dirty Boxer underwear only weighs 200g. I know that because I weighed myself with it and without, so I know how much I have to cut for weigh-in. TNB also got me my tattoo sponsor, Evil Ink. They did my Godfather MMA tattoo, great work!

I don’t have any financial sponsors yet. But believe me when I say I’m a whore for sponsorships and will take anything from anyone. I love being a full-time fighter and I couldn’t imagine doing anything else. I get up when I want to… ok a lot of people ask me if I get up at 6am to run so that I can fit a million training sessions in each day and the answer is no! If I had a 9 to 5 then I’d have to, but right now I can get away with waking up at 9am and managing my schedule so I can fit in these stressful interviews and all those awful massages from the physio. I love my job!

The Wade Henderson/Josh Muller feud:
There is actually no Wade and Josh feud, there is only a Wade feud. I am so perplexed by this. Apparently it was disrespectful for me to walk to the cage at EFC 07 wearing my white belt. I could understand it if I was wearing a brown belt that didn’t belong to me, maybe that would have been an issue, but I don’t see the problem with my white belt. After EFC 08 I will hopefully be a blue belt anyway. I had to beg my BJJ coach for some recognition, after winning all those amateur fights and then my first pro fight, but no, it wasn’t to be. But, after I beat Francois, I will hopefully get my blue belt. I guess that means I have to beat Francois by submission though. Oh well, that means Alex gets to win knockout of the night against Mark.