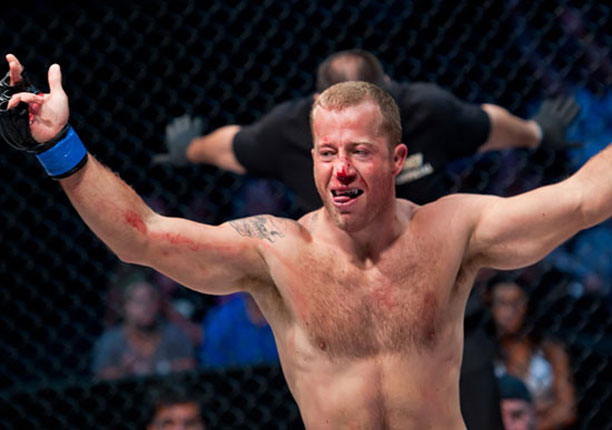 The fans asked for Nolan ‘The Real Deal’ Swanepoel, and that’s exactly what they get! After winning Friday’s Facebook competition, getting more than double the votes of his nearest competitor, Swanepoel clearly has massive support as he prepares to fight for the EFC AFRICA welterweight title. EFC AFRICA presents Nolan Swanepoel’s views on:

Winning the Facebook competition and becoming one of EFC AFRICA’s most popular fighters.
It was great to win the competition on Facebook, thanks so much to all my fans! If I’m perfectly honest with you I know about 20 percent of the people I’m friends with on Facebook, but I appreciate all the interest and friend requests. All the attention that EFC AFRICA has helped me get is quite something to deal with. Most of the time it seems easy to keep my composure and stay grounded, but on the other hand, it’s probably even easier to get caught up in the attention and let the fans blow my head up. At the moment I’m keeping my head down, just training and hanging out at home, so I’m not out in public all that much. But when I go out I do get approached quite often. People will just walk up and talk about fighting, or ask me this and that but I don’t mind, I like talking to people in general. A nice memory is from one of the EFC events, I was walking around and these two little boys ran past, one in a Throwdown shirt. I called out, ‘Hey, nice shirt!’ and they looked back, recognised me and immediately ran back for a photo. Karate and traditional martial arts
Growing up, I actually didn’t have much respect for karate. In school we were all little hooligans, kids are mischievous and we used to get into trouble, fighting and that, and we didn’t see karate as being very cool. Then one day I decided to start martial arts. My dad was all for boxing, but my mom was scared I’d get punchy, so they settled on karate, which I wasn’t too happy about. They sent me off to classes with Sakkie Louw and his wife Sandra, and it was awesome, the best thing that could have happened to me. Looking back, I can honestly say that it’s the individual that makes the art, and that karate is up there with the world’s top martial arts when used by the right people. When I got my third dan I branched out into traditional jiu-jitsu, which differs quite a bit from Brazilian jiu-jitsu. BJJ is very technical on the ground, while traditional jits is more for street self-defence. It’s almost like MMA, as it incorporates clinch work, takedowns and submissions. I excelled in karate and jits and became world champion in both.
International karate is huge. For the world championships, I was number 127, and that wasn’t even half the competitors in my division. It used to take 3 days to fight through to the end. Here in SA the most I’ve had to fight in a day is 18 times. That sort of competition is intense and takes incredible fitness. Another aspect of the traditional martial arts that I value is respect. Jarate and jits come from Eastern arts and cultures and I think that says it all. You bow before you get onto the mat, you bow to your instructors and opponents, and it’s a huge contrast when you look at a sport like boxing where you can just walk into a gym and start skipping without even saying hello. I am a strong believer in etiquette, it’s something else that karate taught me, and something I live with still.

Hobbies
I have a spider called Anderson. I’ve had him for about 6 months and he’s grown a lot. I got him from my girlfriend’s brother, he’s got millions. One is enough for me but I like Anderson and I think he’s just about ready to shed. My latest hobby is banzai growing. I’d always wanted one because they seemed pretty cool so I finally got one. They actually grow pretty quickly but if you don’t care for them properly they also die pretty quickly. You have to keep them moist and cut back the adventitious roots, get rid of the bubbles in the soil, all kinds of stuff. I’m spraying mine with amino acids and it’s coming along nicely, I guess I have green fingers.

The Colosseum
I was a partner in an MMA studio/shop called Figure 4, but it was only about 10m² and half of it was a shop. I sold my share in the business and was fortunate enough to find new premises which my business partner Claudio Teixeira and I named the Colosseum. It’s huge, the mat is 100m² and we have great facilities. It’s hard to believe that a few years ago I was rolling in a converted garage, now I have one of the best training facilities in Africa. At the moment we have about 60 students and we plan to hold an assessment soon. Coming from a traditional martial arts background, I think it’s important to have a grading-style event. It’s going to be long and tedious, and that’s what the guys need. You only get to see what people are made of when they’re down and out and pushed to their limits.

Family
My parents were always a strong backbone for my martial arts. I also see the value of family in my students; those who have their families behind them excel. As for my MMA career, well, my mom was a bit off about it in the beginning but, now that she’s started to understand what MMA is about, she’s supportive. My dad has always been supportive. He was my first corner man at EFC AFRICA, when I fought Remo Ralph, and he was the only one I could hear over the crowd. I’ve got a daughter, Shannon, who is 11. She’s an Eastern Transvaal gymnast but she’s taken a break to focus on her school work. She’s super bright, a real little lady, and she can hold a conversation like someone twice her age. She doesn’t mind MMA, I’ve shown her a couple of DVDs but she hasn’t been to any of my fights yet, she’s not quite the right age. She’s ok with me fighting as long as she gets something out of it so I have to keep winning to give her some pocket money.

Tattoos
On my shoulder I’ve got the skull wearing the Imperial helmet, which symbolises me being on top of my game at the Colosseum. Then I’ve got the phoenix on my back, which is all about life coming from death, and rebirth. Basically, it’s saying ‘Adam, I’m going to get my revenge.’

The South
I’ve always lived in the South, it’s home. It’s a small area and everyone knows everyone and we’re all pretty homely and grounded. There are also some dangerous okes that come from the South, but I don’t know any of those…ha ha.

EFC AFRICA 08
Everything is on track. I had a few minor injury setbacks but nothing that could stop me, and I’m busy working on strategies for the fight. I’m also sharpening up my last bit of fitness and getting my weight down, and I’m feeling strong. I’ve been feeling strong since the day I said yes to the fight, and I’ve received a lot of positive feedback from my fans so I’m looking forward to it.