Don’t mess with the IT Guy! 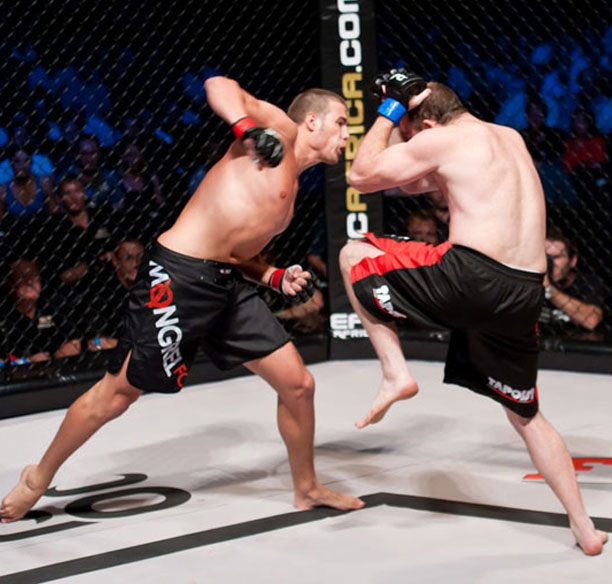 With EFC AFRICA fighter Liam Cleland there is no macho façade, no forced air of invincibility and no smack talk. In fact, all Cleland really wants out of MMA is a couple of good fights to reflect on with his kids when he’s old and grey. But to get those fights, our favourite average Joe IT guy is booting up to become a middleweight MMA machine with one goal; deleting any and all opponents’ title aspirations for the next three years.

“The middleweight division is probably the toughest division there is at EFC AFRICA,” said Cleland. “We’ve got top guys like Garreth McLellan, Darren Daniel, Jeremy Smith and Dallas Jakobi, who are all excellent fighters. It’s probably a bit late for me to make a career out of MMA but, in terms of accomplishing something and looking back with pride, these are the guys I need to beat.”

Cleland’s introduction to martial arts arrived on a whim when he decided to get fit through boxing. One thing led to another and he wound up at Rodney King’s infamous Street Tough gym. He took to grappling and the ground became his home, although his thoughts were far from MMA domination at that stage. “There wasn’t anything specific I wanted to achieve, MMA was just a lot of fun and it was something I slowly got good at. I competed off and on; I had about 10 amateur fights, all wins, and trained with friends in my free time.” 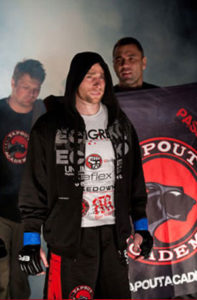 What started as a hobby became something more serious, and Cleland took his first pro challenge in 2003. “My first fight was over in about 30 seconds. I went in with a right hook, dropped my opponent and pounced on him, only to be caught in a triangle choke. We were in a ring and we fell out the ropes so they reset us in the ring again in the choke and I had to tap out almost immediately.” Undiscouraged, Cleland returned to competition, fighting SA MMA trailblazer Kevin Thomas, who Cleland beat by triangle choke. In 2007, for his third fight, Cleland took on a fighter who had just joined MMA after an illustrious Thai boxing career, Jeremy Smith.

“Now that was a good fight. Jeremy had excellent stand-up and he was a very strong puncher. He hit me so hard that his glove broke, and he wasn’t wearing cheap gloves! I got him down in round one but he was up immediately, fighting hard. In round two I slammed him and he seemed a bit fatigued, which allowed me to catch him with a rear naked choke.” With two wins and a loss, Cleland decided to hang up his gloves to focus on a challenge outside the ring: becoming a dad. “With a full-time job and a child that wouldn’t sit still, MMA had to take a back seat. Those were two tough years, going to bed tired, waking up in the middle of the night a few times, and then waking up tired in the morning. Fortunately it passed and I was able to get back to training.”

Cleland sought out an old friend from the Street Tough days, Wiekus Swart, who had opened his own club, Tap Out Academy, in Northcliff, Johannesburg. With EFC AFRICA fever sweeping the country, it wasn’t long before thoughts of competition returned. “My first EFC AFRICA experience was not an easy one. It all began when I mentioned to Wiekus that I wouldn’t mind giving EFC a go. Before I knew it I was signing contracts, being offered match-ups and thinking ‘what have I gotten myself into!?” Cleland’s first EFC fight pitted him against Durban’s Armand de Bruyn. De Bruyn opened with a hip toss and an armbar attempt that Cleland admits was millimetres from ending the fight, but Cleland escaped and won by submission soon after.

For his next challenge, Cleland faces a familiar foe, Jeremy Smith. However, since they last fought, Smith has gone undefeated, even racking up victories against top international prospects. Ironically, Cleland is not afraid to admit that he’s nervous about this fight. “I get nervous before all my fights. In fact I don’t tell any of my family members that I’m competing, to prevent them coming to watch, because that messes with my head. I don’t even like talking about my fights beforehand because my heart rate goes up and I struggle to sleep. However, I’m confident that I can beat Jeremy again, even though it won’t be easy. I know Jeremy has developed his ground game and sprawls, he doesn’t get KO’d, and he doesn’t even seem to feel pain. To prepare for this fight I’ve been focusing a lot on my stand-up, because when you fight someone as good as Jeremy, you better not think you can keep this fight where you want it.” 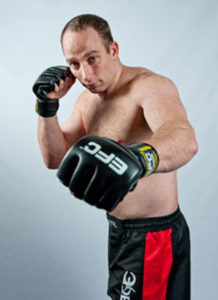 Cleland trains primarily at Tapout Academy, and also with fellow EFC AFRICA fighter Lance Ceronio at Village Walk Planet Fitness where the two focus on stand-up skills. “I train with Lance three mornings a week and spend evenings grappling and working on MMA drills at Tapout. Wiekus is the best grappler and best grappling instructor I’ve ever met. The proof is in his skills, I’ve even seen him beat Rico Hattingh on the ground twice. Apart from Wiekus, we’ve got a full house of top grapplers at all weights and a few of them might be coming over to EFC one of these days.”

“I’d just like to thank EFC for making this a sport we can be proud of. It’s such a pleasure to fight for an organisation that enforces weight limits, blood tests and all the other behind-the-scenes stuff. A lot of doors have been opened by EFC and for the first time, I think this may be something I’d actually let my son get involved in. Lastly, thanks to Cage Rage for sponsoring me some shots and a mat for the gym, I appreciate it!”

See Cleland in action against Jeremy Smith at EFC AFRICA 09 on 30 June at the Coca-Cola Dome. Tickets on sale now at Computicket.