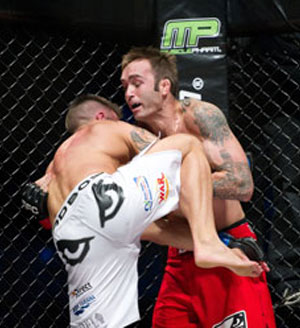 Wade ‘GOAT’ Henderson and Wiehahn ‘Pitbull’ Lesch have been sizing each other up ever since they were scheduled to fight at EFC AFRICA 08. They blame each other for the delay, which guarantees an explosive confrontation on 30 June.

In his last three fights, Henderson has faced the top of the middleweight division, McLellan, Joubert and Jakobi. In his last fight against Jakobi, Henderson’s striking highlighted round one, making his loss in round two, with just seconds left on the clock, that much more agonising. “I took the loss to Dallas quite hard. I was dominating that fight until I got cocky on the ground and paid the price. Defeat was a bitter pill to swallow but I wish Dallas all the best and I’m hungry to see what the future holds. After that fight I went to Thailand for a bit of training at Tiger Muay Thai and a lot of relaxing to get my mind right. This year I intend on improving my game even more by staying active.”

Henderson now prepares for Wiehahn Lesch, a 37-year-old wrestler that Henderson claims has been badmouthing him. “I know Wiehahn is from the old school of MMA and he’s going to be a tough opponent, probably my toughest to date. Apparently Wiehahn told the whole of Cape Town that I was afraid to face him in April. Everyone knows I’ll fight anyone, anytime. I’m not scared of a geriatric with a walking stick and I just hope he has the balls to stand and trade with me instead of sticking to his boring wrestling game. He may be a top wrestler but it’s nothing I haven’t seen before; when I lived in Thailand a couple of years ago I trained with top UFC fighters and I fought Brian Ebersole, who could teach Wiehahn a thing or two about wrestling. I’ve got nothing to worry about from this old man because I’m better-rounded than him in terms of striking and jiu-jitsu, I have great takedown defence and a fantastic clinch.” 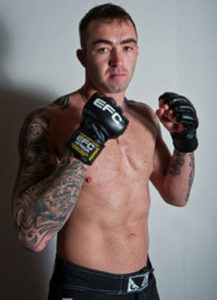 Henderson would like to thank his training team for their dedication in the lead-up to EFC 09. “Thanks to Sergio da Silva and Body Conscious for improving my physical conditioning and providing the best cardio training I’ve ever had. Thanks to Tiny Strauss for believing in me, Gert Strydom for taking my hands to the next level, and everyone at Titan for keeping me in shape and motivated.