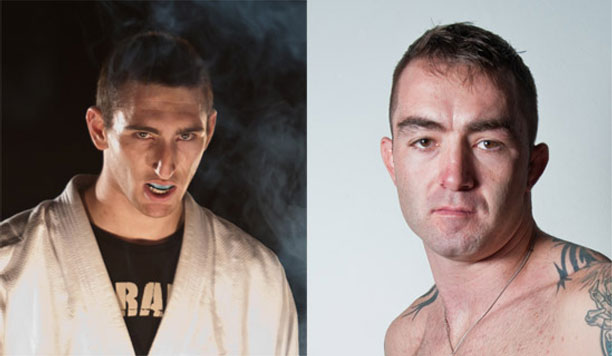 Although the vast majority of EFC AFRICA athletes bear no ill will towards each other, there will always be a few that simply don’t get along. Case in point, Wade Henderson and Josh Muller. Henderson has been Muller’s biggest critic ever since he joined EFC AFRICA. At EFC AFRICA 09, Henderson used his post-fight interview to challenge Muller to a fight and, unless you’ve been living under a rock, you’ve probably noticed Henderson’s almost daily taunts on Facebook and Twitter.

EFC AFRICA spoke to both Henderson and Muller to get their thoughts on the issue, and to discover whether they are ever going to settle their differences in the cage.

“When Wade called me out at EFC 09 I was sitting in the 4th row and it came as a bit of a shock,” said Muller. “Basically, Wade is a bully and I’m the new kid so he’s using me to get attention. I actually think he’s doing the right thing by trying to generate some interest in his career, but he’s picked on the wrong guy if he thinks he’s going to get an easy fight. However, my manager and I have decided not to take the fight…yet. I’ll be the first to admit that right now I’m not ready for Wade. He has better stand-up and he’s a lot more experienced so I need some time to get my skills up. So no, I’m not going to fight Wade at EFC 10, but I’d definitely like to take him on, possibly at the first event of 2012. I want to be the next person to beat Wade Henderson but it’s unlikely because there are so many other people that want that too.”

Interestingly, this isn’t the first time Henderson has called out Muller. After Muller’s first pro fight Henderson threw down the challenge.

“After my first EFC fight Wade found a ridiculous excuse to challenge me, apparently because I walked to the cage wearing a jiu-jitsu gi. Then, because my coach Brad Bloch often works with guys from Wade’s gym, Wade came to train with us. We did some takedowns and grappling and I threw him on his head five times in a row then tapped him out with a modified gogoplata within 15 seconds. I know this sounds like trash talk but it’s not, this actually happened. Afterwards he was all friendly and I thought that was the end of it. Turns out I was wrong. We met up again at a grappling competition and I was having a really bad day at the office. I lost to nearly everyone, but sometimes you get those days. So anyway, I had to grapple with Wade and I was taking it easy on him, a mistake I’ll never make again, because he had a knee injury. So he beat me and soon after he started calling me out again on Twitter, and then of course at EFC 09. I think it’s really juvenile but I’m not scared to face him, just not completely ready.”

EFC AFRICA went straight to the source to find out why Henderson wants to fight Muller so badly, and also to give him the news that Muller gave a tentative 2012 date for their encounter.

“The reason I want to fight Josh is because he has a big mouth behind a person’s back. I’ve heard a number of his comments through the grapevine and I didn’t appreciate what he said about me on his Facebook page when he wrote his predictions for my fight against Wiehahn Lesch (which had to be cancelled due to Wiehahn suffering an injury before EFC 09).”

“I’m not going to make stories up so yes, it’s true that I trained with Josh and he got the upper hand with takedowns on that particular day. But I wasn’t the one that couldn’t handle the intensity and had to go puke in the bathroom. And when it did come time to compete for real at that grappling competition, who won? I did. Do I respect Josh’s grappling? No, I don’t respect him at all. As for him getting ready to fight me in 2012, I’ll fight Josh blindfolded with one hand tied behind my back anytime he wants.”