Tough Guys Don’t Have to be Bad Guys 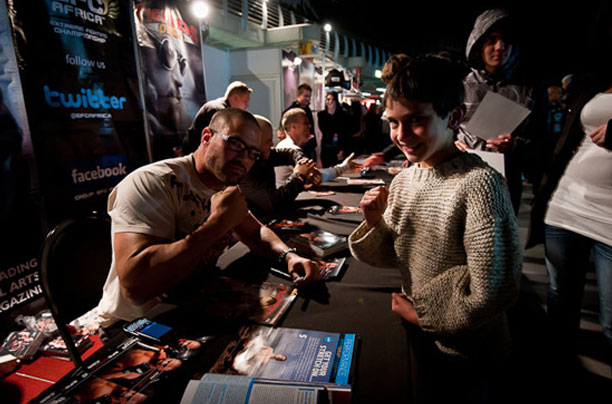 EFC AFRICA athlete and Ballito resident Sean Robinson is the perfect example of an MMA fighter that has crushed, battered and beaten the negative stereotypes around ‘tough guys’. Tattooed, muscle-bound and dangerous he may be, but he is also a loving family man, altruistic charity supporter and ardent member of the church. In fact, when he’s not in the cage pushing the limits of the human body, he’s in schools, orphanages and squatter camps pushing the limits of the human spirit.

As the founder of Fighters Against Abuse, Robinson hopes to use his status as one of EFC AFRICA’s most popular fighters to spread the message that tough guys don’t need to be bad guys. “At the moment it is fashionable to be an MMA fighter,” says Robinson. “And there is a perception that being a tough guy, which many would identify with being an MMA fighter, means that it’s ok to lose your temper, be aggressive and use your physical strength to intimidate or abuse others. Well I’m here to show that a person can be tough and still remain soft-spoken, respectful, stand up for women and children and never lift a hand in anger.” 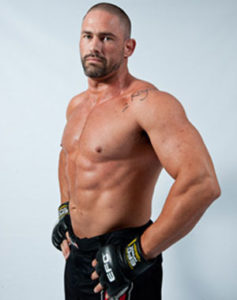 Robinson recently organised a screening of an MMA event at a local Durban restaurant as a fundraising initiative. The funds raised were used the very next day to distribute blankets to the needy, which took the chill off winter and undoubtedly warmed hearts and changed the perceptions around MMA. “When I go out and do charity work it’s clear that people are apprehensive at first; my appearance can be intimidating, but before long we’re all laughing and smiling together and people are realising that being tough can mean being kind. And I’m not ashamed to admit that I’m deeply moved by my charity experiences – it’s hard not to shed a tear when you see a five-year-old boy standing in line alone, in the cold, for some donated bread because his dad is at home dying of AIDS and his mom is at work trying her best to support them.”

According to Robinson, there are an endless number of charity opportunities out there for MMA athletes and other ‘tough guys’ to embrace, and it’s much easier to get the ball rolling than they may realise. “If anyone wants to get involved or needs a few ideas please contact me. Even if you don’t have the time to get involved in charity work, remember that you have an impact on those around you in everyday life and just the way you conduct yourself can go a long way to changing perceptions. Next time you’re at a braai, just make a conscious decision to tell the people around you how you feel about abuse and it will most probably sink in more than you realise. If all MMA fighters take a stand and set an example we really can make an impact.”

“Lastly, I would just like to say that I am proud to be a part of an organisation like EFC AFRICA that has given me an amazing platform to spread this message.”