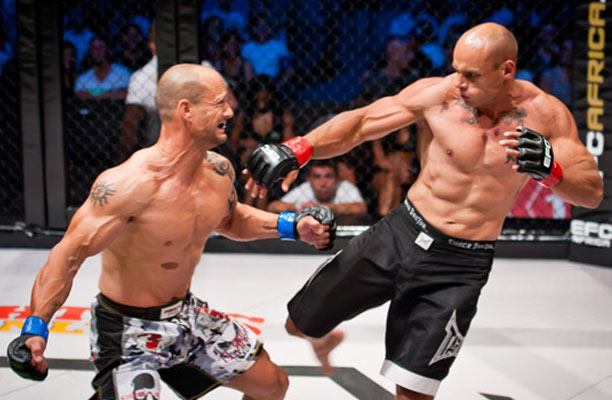 Ever since Paul ‘Terror’ Terblanche landed EFC AFRICA’s fastest knockout (just 7 seconds in against Janus de Lange at EFC 06) fans have been asking for more from the ultra-explosive middleweight. On 1 September those requests will be answered, as Terblanche takes on Tyron Rightford at EFC AFRICA 10. Terblanche is an intriguing figure but, up until now, all that most of us knew about him was that he came from Cape Town, had an insane pre-fight stare, and liked to walk out to feel-good reggae. Although he’s currently training at Wolfslair MMA Academy in the UK (home to UFC fighters such as Michael Bisping, Rampage Jackson and Cheick Congo), EFC AFRICA did manage to get him to sit still long enough to tell us a bit about his training camp and his upcoming bout.

How did you end up at Wolfslair?
When I first signed with my coach Gregor Weichman I trained at his gym, Bulldog Gym in Cape Town, a traditional Muay Thai gym. Gregor brought in various coaches to convert me into an MMA Fighter. We focused on wrestling first (with an SA heavyweight champ) and later I had a designated MMA coach in Eddie Lallo. My teammate Don Madge helped me with boxing and Thai boxing, and I did my own strength and conditioning training in my own gym in Malmesbury. Then Gregor sold Bulldog Gym and retired from active training, but agreed to remain as my manager, so we looked at training camps overseas in preparation for my future fights. Gregor spoke to Tom Blackledge (head coach and manager of Wolfslair), who then watched some of my fights and invited me over.

What was the first day at the gym like? Any big surprises?
It was very hard! I could not breathe – I don’t need a training mask here! The high level, especially from the stand-up guys, surprised me. I took loads of shots to the face. Sparring is at 110% here.

How does the training and attitude of the fighters compare to SA?
In terms of attitudes – there are no attitudes! Everyone has so many fights under their belts that they have no time for attitudes! Everyone wants to help you. Liverpool people are great! It makes a big difference to be living in the gym and not having to worry about normal life which unfortunately is unavoidable in South Africa.

How long are you over there for and when do you return?
The training camp ends on 12 August (after 6 weeks). Then I am going to be a “tourist” with my fiancée for a few days. I am back in South Africa on 18 August.

What lessons have you learned?
[Laughs] Don’t block with your face!! Here MMA is almost a team sport – everyone encourages you. I also learned to stand on my own feet – at home my fiancée, Rouxlene, and my manager Gregor, do everything for me ! I have learned to work a computer and Skype! In my next life I might be an IT manager!

What have you been up to outside the gym?
I sleep and talk to my fiancée over Skype! I have also become good friends with Tony Moran and on weekends I go and stay at his house to get out of the gym. I’m also helping in the corner of a young girl (training at Wolfslair) in her first MMA fight. On 12 August I get a new tattoo and visit friends in the UK, but I will still do cardio everyday!

Have you missed anything about SA?
I miss the weather, the food, sushi (especially at Asian Asia, where I hold the record for eating 76 pieces in an Eat-as-much-as-you-can-buffet!) of course I miss my girl and the family but time passes so quickly so I just train, eat and sleep and stay out of trouble.

Do the guys overseas know anything about EFC AFRICA, or have you managed to get them interested?
Everyone at Wolfslair wants to come! They think it’s a “cool show”. Everyone (including Curt from UFC) said they would come over and fight for a McDonalds Happy Meal ! Graeme: How about Costa vs Curt Warburton ? EFC vs UFC??

What do you know about your opponent at EFC 10, Tyron Rightford, and what do you consider his strengths to be?
I saw his fight live at Nu Metro Canal Walk in Cape Town. He has no strength but maybe some karate technique. Everyone knows you can’t teach strength so maybe he can test my ground game if he wants to. 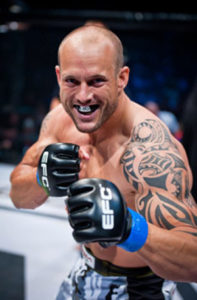 What can the fans expect from this fight?
I will always give my best. The fans can expect a stand-up fight. If he can stand with me, we will go for Fight of the Night. Otherwise, expect another Knockout of the Night!

Why do you believe you are going to win this fight?
I never go into a fight to lose. Only a lucky punch can save his ass! My EFC 06 KO of the Night bonus helped pay for Rouxlene’s engagement ring. Now I need another bonus to pay for my wedding!

Is there anyone you would like to thank or mention?
I want to thank Tom and the whole Wolfslair MMA team, especially Barry – the best strength and conditioning coach ever. I want to thank Tony for inviting me over to his house on weekends and I want to thank all my sponsors for making this trip possible (Eight Limbz, Remax, War Supplements, Piketberg Apteek, Ateka Automation, Piketberg Drukkers, Rocky’s Gym and Fitness, Steel Chameleon, Gym Tech and Steel Tech) and most of all my dad.

Have you had any other fun experiences on this trip?
I met Royce Gracie on Friday. I almost kissed him! As a young boy I saw him fight Ken Shamrock in one of the first UFC events. He is a legend, a hero and such a nice and humble guy.

Lastly, I am glad that I will be coming back to an awesome new fight team Cape Combat Coalition which was established while I was away. Gregor Weichman has partnered up with Mike Mouneimne of PFA and we now have a professionally-managed fight team headed by Brazilian BJJ Black Belt Jadyson Costa and a group of very talented fighters like Don Madge, Mark Jones, Abrie Valentine (who gave me the toughest fight in my career) and others who will soon join me in the EFC. Watch out for CCC. I also believe newly-crowned EFC heavyweight champion Ruan Potts is training with CCC at the moment and can’t wait to join in….

See you in September and thank you guys for giving us fighters this amazing platform called EFC AFRICA!