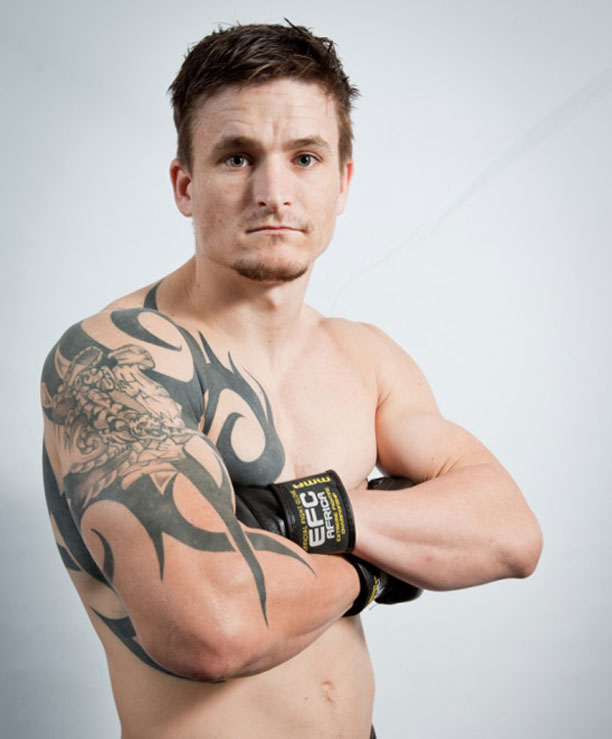 Wesley Hawkey comes from a family of fighters and will be the first of his clan to test the waters at EFC AFRICA. His EFC AFRICA 10 opponent is Jean Luc Kazadi, who has an identical record of 4-2, which means the pressure is on for both to improve their standings in the featherweight rankings.

“I haven’t seen too many of Jean Luc’s fights but I really wasn’t impressed by his performance against Demarte Pena,” said Hawkey. “His ground game was pretty horrible, he gassed in the second round and he had a sluggish jab. My plan is to outbox him then take him to the ground with big slams. If the opportunity is there I’ll finish him, but I’m not expecting a quick fight.”

Hawkey got off to a very impressive start early on in his MMA career but is coming off a loss in his last fight, a first round submission to Francois Groenewald, another featherweight he has a chance of running into at EFC AFRICA

. “I think one of the main problems I had in the fight with Francois was getting to featherweight too soon. I made 66 four days before the event and battled to maintain it. Plus, the night after the weigh-in I went out for a big pasta dinner and got jippo guts! I was in the bathroom two minutes before our fight. But he won fair and square. I felt stronger but his technique was excellent, and I’ve been training with 10th Planet since then to get my jits up.”

To fight at featherweight, Hawkey drops from 78kg to 66kg, an incredible 12kg! As long as he gets the cut right, he feels he’ll have a significant advantage over Kazadi.

“I think he walks around at about 64kg so there’s no question that I should be bigger and stronger than him on 1 September. I’m really looking forward to this fight and I’m expecting to do well.”

Hawkey would like to thank his teammates from MMA Elites, wife, coaches, fans, and Roger from Ecko for the sponsorship. He also hinted that although he’s the only Hawkey at EFC AFRICA right now, there’s a very good chance that’s going to change soon…