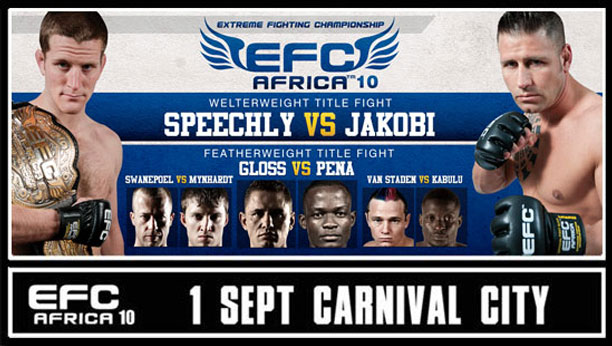 At welterweight, Brazilian jiu-jitsu black belt Jadyson Costa made his EFC AFRICA debut in spectacular fashion, submitting Wade Henderson by kimura 3:15 into round one. His showmanship came to the fore during his walk in and his victory celebration and he even got a kiss from each of the beautiful EFC AFRICA ring girls on the way out. EFC AFRICA can’t wait to see what this Brazilian import (now based in Cape Town) has to offer African MMA in future.

Knockout of the Night went to Tyron Rightford, whose 44 second TKO victory over Paul Terblanche put a decisive end to their bitter rivalry. Fans were expecting an explosive all-out war and that’s exactly what they got. Fists flew furiously from both, but in the end only Rightford was left standing. It was also an excellent night for Rightford’s teammate Nolan ‘Real Deal’ Swanepoel, who defeated top striker Leon Mynhardt.

As EFC AFRICA and its fighters have gained popularity, fans have become involved in tracking the careers of their favourite athletes, bombarding social media with predictions and arriving in force for live events. Thanks to this growing base of vocal fans, EFC AFRICA 10 resonated with chants from start to finish. At 7.30pm the excitement spilled over into Nu Metro cinemas around South Africa where thousands more fans cheered on their hometown heroes, and the exhilaration spread to the internet, where thousands more logged onto the free live stream for hours of adrenaline-fuelled excitement. Comments came in praising the production, professionalism and skill levels of the athletes, further bolstering EFC AFRICA’s position as a serious force in international MMA.

EFC AFRICA 10 was presented by MusclePharm. EFC AFRICA 11 takes place at the Coca-Cola Dome on 10 November.