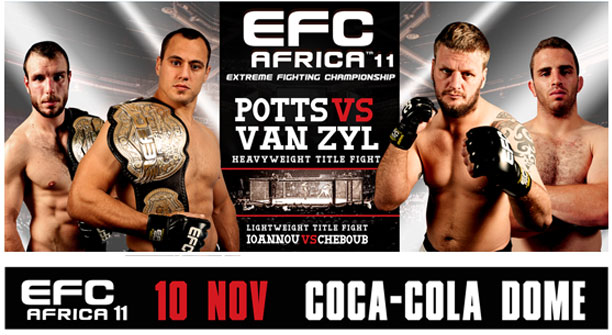 Johannesburg (South Africa) – With just two weeks to go until EFC AFRICA 11, the biggest MMA event in Africa this year, two athletes have been removed from the card due to injury. Michiel Opperman and Ian Visser, both from Pretoria’s Team CIT gym, sustained injuries during training and have been forced to withdraw from competition.

Opperman suffered a fractured hand and has been replaced by Egypt’s Yehia Akram Deghidy. Deghidy makes his EFC AFRICA debut at middleweight against Opperman’s original opponent, Donavin Hawkey. Deghidy is a formidable fighter with a long history in kickboxing (32 fights) and has enjoyed success in MMA, amassing a professional record of 5 wins, 2 losses.

Visser is unable to compete due to a hernia. No replacement could be found and, as his bout against Dain Neveling was scheduled to be the very first of the evening, the event will now begin with the next fight on the card – Armand de Bruyn vs Tez Makuebo. EFC AFRICA wishes Visser a speedy recovery and Neveling has been invited to make his EFC AFRICA debut in March 2012.

EFC AFRICA 11 takes place at the Coca-Cola Dome on 10 November. Tickets on sale now at Computicket www.computicket.com and tickets for the live broadcast to Nu Metro Cinemas available at www.numetro.co.za