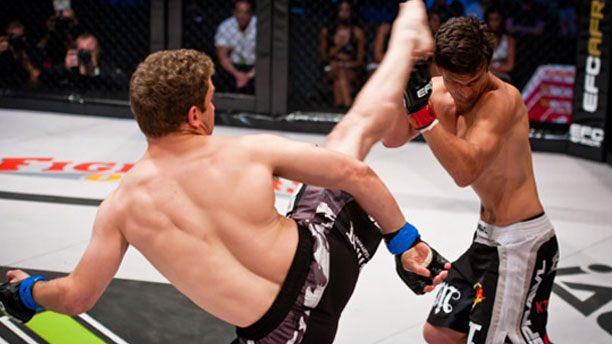 Known for his unorthodox fighting style, slick submissions and flashy striking techniques, Alex Cheboub is now one month away from fighting for the EFC AFRICA lightweight title. To become champion, Cheboub will have to defeat current champion Costa Ioannou, a challenge he is looking forward to, and one he is confident he has the skills to overcome. Get to know ‘The Professor’ as he prepares for the biggest fight of his career.

How did you get into martial arts?
“The first martial art I took up was Judo at the age of about 7. I didn’t really like it. I wanted to do something with punches and kicks. I only really got into martial arts a few years later when I was 14. I was a boarder at St Albans College in Pretoria, where I made friends with some Korean kids who told me about a Korean diplomat living across the road from the school. He was an 8th degree Taekwondo black belt and I approached him one day and asked if he would teach me. I found I had natural ability for technical kicks and, under his instruction, I won the SA championships. Unfortunately he had to leave SA and I was never able to find the same level of Taekwondo instruction again, which led me to other martial arts such as Sanshou, Lei Tai, boxing and MMA.” 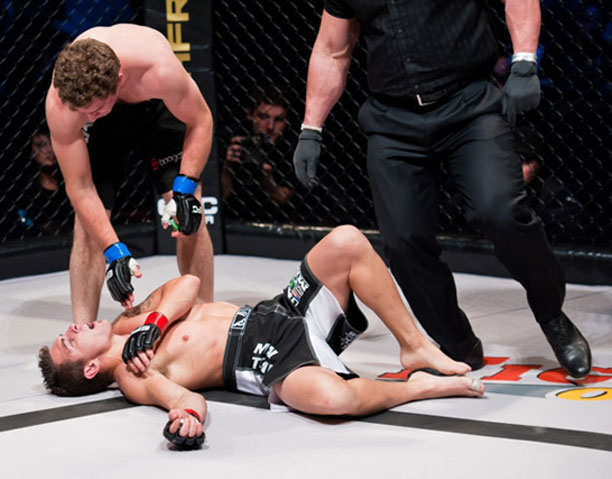 Have you ever had to use your skills outside of competition?
“I’ve never been in a proper street fight. I got in one brawl in school where I landed a jab and broke a guy’s nose. I got in a lot of trouble for that. Thankfully I’ve never had to use my skills in a real life self-defence situation.”

Do you think traditional martial arts have valuable applications in the modern world?
“We live in a very violent culture. South Africans routinely go out on the weekends to get trashed and look for fights and that just never ends well. My Taekwondo coach was very traditional and I picked up a lot of the virtues of martial arts from him, not just the skills. I’m not saying everyone should be Zen masters, but if you look at the East where they have a traditional culture of respect and integrity there’s a much lower violent crime rate. Besides self-defence, the values taught by traditional martial arts have the potential for a lot of good.”

Have you been involved in any other, more mainstream, sports?
“I used to play rugby. I’ve been the same height since I was 14, which was useful back then. I started out as a lock, then a prop, then a flank. I stopped rugby after a particularly vicious match. The ref was totally ignoring the other team’s indiscretions, and one guy kept stomping on my knee. Then he hit me and I lost it. I kicked him in the chest and got sent off.”

Tell us a bit about your family and where you’re from.
“My surname is Middle Eastern in origin but I grew up on a plot in Fourways, Johannesburg. My dad is from Egypt and my mom is of English and Irish descent. My dad’s Middle Eastern outlook sometimes clashes with my mom’s Western views but it keeps things interesting. Having a bit of a strange accent and a big curly afro was a bit difficult in my school days though, I got thrown in a lot of dustbins.” 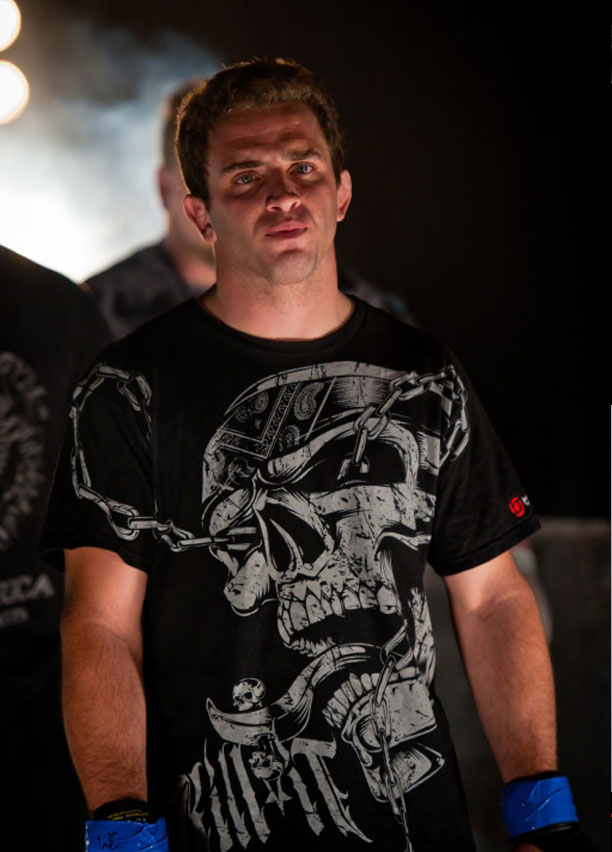 How did you get into MMA?
“I discovered MMA at the end of 2006. I did a search on the internet and found Brad Bloch’s gym, at that stage known as House of Pain (now Godfather MMA). With his background in Chinese wrestling and my interest in Chinese martial arts I thought it sounded like a good place to start. I had a belt in judo and wanted to see if MMA had anything to offer. I got caught in a bout 10 triangle chokes and was so upset, but also motivated to adapt to this new martial art.”

Where does your fighting name, ‘Professor’ come from?
“The guys at EFC AFRICA gave it to me, probably because I sound educated, but it fits because I’m a teacher at the moment and I have a degree in microbiology and genetics. I always wanted to be a scientist but it was hard finding work in that field in SA. When I graduated I started working at a renewable energy company that was mismanaged. I really believed in the work and stayed on at half salary for a while, but when they wanted to cut it to no salary I had to leave. It was sad but interesting. I’d still like to get into conservation and bio-diversity in future though.”

Have you ever fought anyone you genuinely disliked?
“No. I’ve fought people I’ve been neutral about, but my last few opponents have all been really great guys. Mark Jones, William Bentley and now Costa Ioannou, they’re all down to earth and we don’t have any bad blood. I think that’s a good indication of the character of the guys at the top level of this sport.”

What do you know about your opponent, Costa Ioannou?
“Costa is absolutely huge for a lightweight and he trains like a psychopath. He’s unbelievably strong and tough and he probably has a conditioning advantage over me. Although he’s a BJJ brown belt I think I have a better ground game. He’s got a great Thai clinch but I think my Judo and Greco-Roman wrestling give me a stronger all-round clinch. His boxing is very strong but I know I have better kicks. He has the physical attributes, I’ve got the skill, but I’m training as hard as I can to make the gap as small as possible. I’m pretty sure Costa can go five rounds without much trouble. I doubt I’ll be able to finish him in the first round, but a second or third round finish is definitely my aim.”

What does this title shot mean to you?
“It means so much! I’ve made a lot of sacrifices to win this title. Right now I’m eating like a saint and training like a demon! This title will also give me recognition. I’ve won titles and colours in sports that few people have heard of, but with MMA growing like it is, this title is worth a lot.”

Is there anyone you’d like to thank or mention?
“Thanks to my coach Brad Bloch from Godfather MMA who’s taken me this far, Abel Ayele my black belt BJJ coach from the States, Carlos who’s also taught me so much, and all my past martial arts instructors. I’d like to thank my family, my girlfriend and my sponsors Sprawl, Contract Killer and Infinite Labs.”