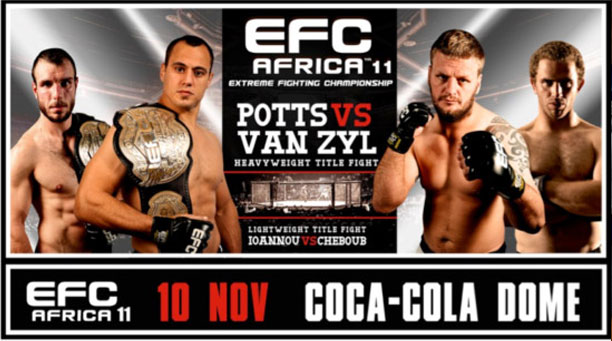 Johannesburg (South Africa) – The last EFC AFRICA fight night of the year is just seven days away! Get your tickets now for EFC AFRICA 11, where 26 of the continent’s most spectacular mixed martial artists will do battle. EFC AFRICA 11 features two of the year’s most significant title fights, plus fan favourites that have been requested all-year round.

To see all 13 bouts, get to the live event at the Coca-Cola Dome on 10 November or book tickets for the live countrywide Nu Metro cinema broadcast. Book through www.computicket.com or www.numetro.co.za now to avoid disappointment!

Weigh-in for EFC AFRICA 11 takes place on Wednesday 9 November from 2pm at the Coca-Cola Dome, Johannesburg. Once again, weigh-in is open to the public and free drinks and snacks will be served. Come down to support your favourite fighters and add to the electric atmosphere! Prizes will also be awarded to clubs that bring the most supporters.

On event day, Thursday, 10 November, Coca-Cola Dome doors open at 4pm, followed by the first bout (and start of the live broadcast to Nu Metro) at 5pm. Main card bouts will also be shown live online at no charge from 21.30pm.

EFC AFRICA 11’s main event sees heavyweight wrecking machine Andrew ‘One Gear’ van Zyl challenge current champion Ruan ‘Fangzz’ Potts. Van Zyl, a school teacher by day, is good at hitting the books, but great at hitting his opponents, while Potts, a former dental technician, is skilled at both making teeth and knocking them out. When these undefeated behemoths collide, one will taste defeat for the first time while the other will take the most prestigious title in African combat sport – the EFC AFRICA heavyweight title.

The co-main event showcases the rivalry between two exceptionally skilled lightweight fighters. Costa Ioannou is the reigning lightweight champion, having taken the title from Wentzel Nel at EFC AFRICA 08 in one of the most climactic bouts in EFC AFRICA history. Ioannou is now 3-0 and heralded by many to be one of the top pound-for-pound fighters in Africa. Facing him will be Alex ‘The Professor’ Cheboub, undeniably one of EFC AFRICA’s most cunning and unpredictable fighters. A qualified scientist, ‘The Professor’ uses his formidable intellect to craft technical fight strategies and outwit his opponents.