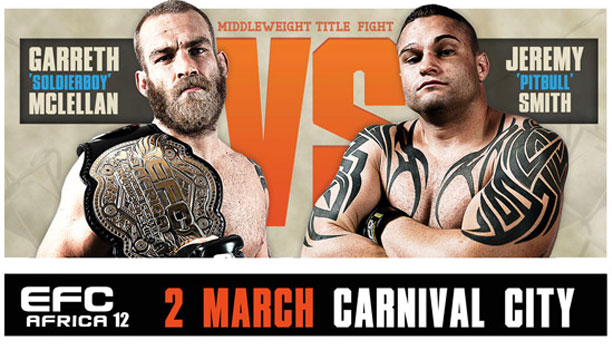 Johannesburg (South Africa) – Tickets for EFC AFRICA 12 go on sale tomorrow, 8 November, at 12h00! The first EFC AFRICA event of 2012 features a main event that has been months in the making: EFC AFRICA’s middleweight championship clash between defending champion Garreth ‘Soldierboy’ McLellan and Jeremy ‘Pitbull’ Smith is one of African MMA’s dream match-ups. See these two exceptional athletes settle their title dispute once and for all on 2 March at Carnival City Big Top Arena. At least 12 other explosive bouts will make this an event not to be missed. Get your tickets from tomorrow!

We are now just 3 days away from EFC AFRICA 11, the last, biggest African MMA event of 2011. Tickets are still available for the live event on 10 November at the Coca-Cola Dome, and the live broadcast to Nu Metro cinemas from 5pm. To see all 13 bouts, book through Computicket or Nu Metro now!

Weigh-in for EFC AFRICA 11 takes place on Wednesday 9 November from 2pm at the Coca-Cola Dome. Once again, weigh-in is open to the public and free drinks and snacks will be served. Come down to support your favourite fighters and add to the electric atmosphere! Prizes will also be awarded to clubs that bring the most supporters.