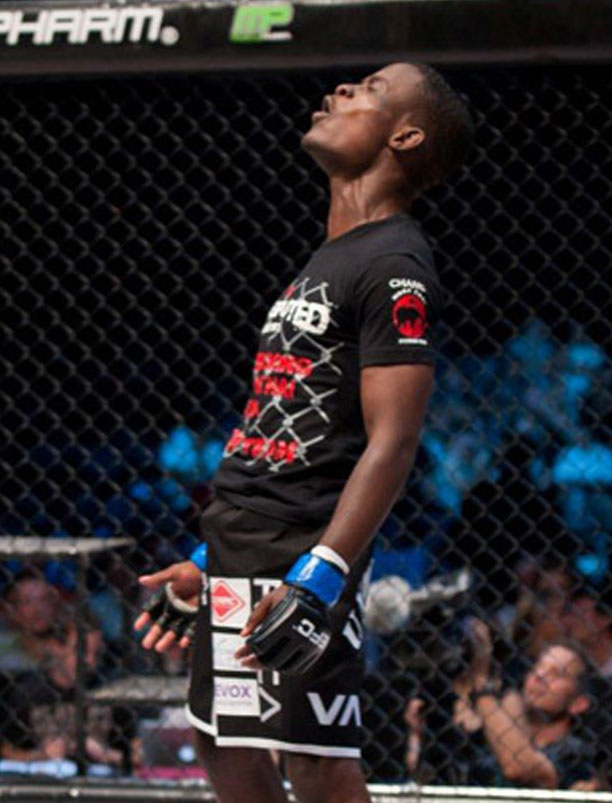 Even when you’re champion, there is still so much to learn. EFC AFRICA featherweight champion Demarte Pena knows this all too well, and in order to stay champion, he’s decided that the time has come to spread his wings. Pena becomes an official member of Fight Fit Militia from 12 December.

According to Pena, the move is an amicable one and no bridges have been burnt. “Kru Dimitri (head coach at Undisputed Fight Club) and I have always had a really strong relationship and he has helped me get to where I am, and I’m grateful for that,” said Pena. “We both decided that this was the right time for me to move somewhere else because that is the only way one can improve as fighter. I approached Richie Quan and Norman Wessels for a possible move to FFM. They were more than willing to take me under their wings, and now I’m looking forward to joining a new fight team ahead of 2012.”

In order to unlock his potential, Pena will be annihilating pads while most are cutting into roast dinners. “I’ll be training with the FFM team throughout the festive season. Holidays one gets after the fight, the rest of the time is training and more training. I only have one goal, to constantly improve, and this is just the latest step towards it. The Wolf of 2011 is dead and gone. Expect a new and more aggressive Wolf for the coming year.”

Since becoming champion, a lot has changed for Pena. He’s become a sporting celebrity, a national hero in Angola, and he’s weathered his fair share of criticism. “After the very controversial fight with Leo Gloss I analyzed my career and the path that I want to take as a fighter, and decided that many changes are ahead of me. In terms of publicity, yes, I’ve gotten a lot of attention in SA and even more back in Angola. It’s beautiful to see the growth of the sport in the rest of the African countries. But all the attention doesn’t mean that much to me; I appreciate every little bit of it but I know there’s a lot of work ahead. I’ve had bad responses and good responses, but I know my job is in the hexagon and in no way do I except every single person to like me. That would just be weird!”

“I’d like to thank FFM for taking me in as part of their family; Kru Dimitri and Undisputed Fight Club for supporting me in my journey; and my manager, Kady, for guiding me every step of the way. I am also extremely grateful to my sponsors: TapouT, Everlast, Second Skins and Lion supplements (more to be confirmed for the year 2012). Lastly, equally or even more importantly, my family, friends, fans and critics. It’s all because of you guys that I do this!”