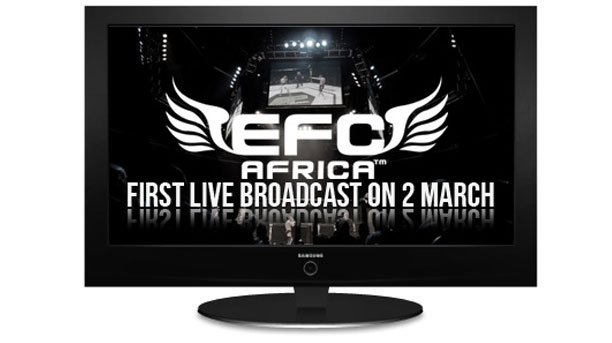 On 7 January, EFC AFRICA had a peak viewership of 1.2 million in South Africa, with the broadcasts increasing e.tv viewership by up to 50% in the allocated time-slots. With e.tv available in 49 African countries, millions more viewers across the continent were able to tune in, making EFC AFRICA one of Africa’s hottest and most popular sports and entertainment properties.

“The success of our first few episodes on e.tv shows how much Africa loves MMA and our content,” says EFC AFRICA president Cairo Howarth. “We can’t wait to break all records with EFC AFRICA’s first live broadcast on e.tv on 2 March.”

Main card bouts from EFC AFRICA 12 will be broadcast live on e.tv on 2 March. The main card includes the much anticipated middleweight title clash between Garreth “Soldierboy” McLellan and Jeremy “Pitbull” Smith, as well as Sean Robinson vs Tumelo Maphutha and Donavin Hawkey vs Tyron Rightford.

EFC AFRICA 12 takes place at the Carnival City Big Top Arena on 2 March and features 12 bouts of African MMA. Tickets for the live event are on sale now at Computicket. The entire event will be available via live broadcast to Nu Metro cinemas, as well as live pay-per-view streaming at www.efcafrica.com. Nu Metro Cinema tickets available at www.numetro.co.za.