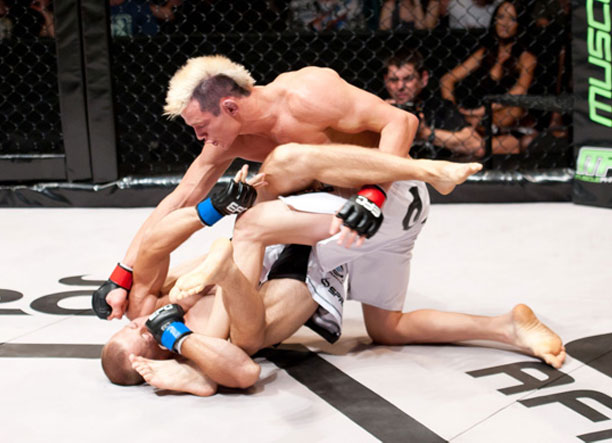 Martin ‘The Punisher’ van Staden recently stopped by the EFC AFRICA office to pick up a DVD copy of his most recent fight, to study it and iron out any flaws before he takes on Dino ‘The Lion’ Bagattin at EFC AFRICA 12 in March.

“I can’t wait to see my last fight with Nolan, because it’s one thing fighting but another thing watching yourself fight. I actually get more nervous watching my fights afterwards; even though I know the outcome, I still worry about stupid mistakes and how they look on camera. I’m always critical of my performances, but Nolan and I had a good scrap so it should be fun to watch.”

“During the fight, I expected Nolan to try to take me down, take my back, and go for a rear naked choke, because that’s his go-to move. To prepare for that, we drilled a lot of back defence but, even so, Nolan was able to take my back twice. Fortunately, he could not finish from there and I think that’s what broke him in the end, because he didn’t seem to have any other ways to finish the fight.”

The fight against Swanepoel was van Staden’s first as a member of Fight Fit Militia. Van Staden claims that initially, his new team was not too happy about him taking a fight so soon. “I only had six weeks training with Richie Quan before the fight, and he was against me taking a fight against a highly regarded opponent like Nolan. However, after the first week at FFM, Rich could see how committed I was and how fast I was picking things up, which put him more at ease. All the FFM guys helped me and made me feel at home and their formula is the best I’ve experienced in SA MMA. When it came time to fight, I’d never felt so fit. I remember going into round two and I was still bouncing around! It’s tough to describe how good it felt being in such great shape!”

Van Staden is now seven weeks away from his bout with respected striker and number 2 ranked welterweight Dino Bagattin. Anyone that’s been paying attention to twitter will have seen the wealth of hilarious insults van Staden and Bagattin have been throwing at each other, and van Staden is really looking forward to backing up his bravado. “I’ve never been this angry for a fight before, although that’s not entirely Dino’s fault. I’ve been through a lot lately, including a divorce, and I intend to take out all my frustration on Dino. I respect Dino, I think he’s going to be a great opponent, but I just can’t see him beating me. But that’s the great thing about MMA, it’s a gambling sport and there’s so much that can happen. I’m going to keep tweeting, revving him up, because I think I can motivate him to give better responses than he’s given so far. Plus, I’ve got a few nice surprises for him at weigh-in and beyond.”

Van Staden and his FFM teammates recently spent a month in Canada, training at world-renowned Tristar gym with the likes of GSP, Kenny Florian, Mark Bocek, Denis Kang, Rory MacDonald and many more. “They were all really cool guys. It was quite an experience staying in a massive dorm with a bunch of the world’s top fighters; everyone was so chilled and friendly, I guarantee if it was a house full of normal guys and someone didn’t do the dishes they’d be smashing each other in no time! I learnt a hell of a lot and I can say SA is catching up fast. Having 15 black belts in a class, compared to like 5 black belts in our country, makes a huge difference to the speed at which skills improve.”

“Over Christmas I had an injury and took six weeks off to go back to Durban and relax. I partied hard and went missing for days, but now I’m back in Joburg and training hard. I’m actually living with teammate Garreth McLellan at the moment, he’s a good friend of mine and the great thing about sharing a house is that we can push each other 24/7 to give the best performances ever at EFC 12.”
Follow Martin van Staden on twitter Follow @thepunishermma1