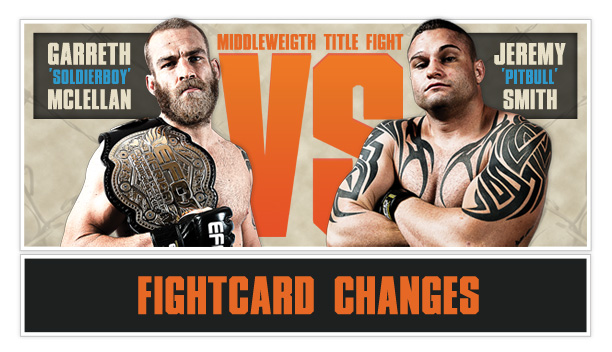 With four weeks to go until Africa’s biggest MMA event, injuries have forced two fighters off the card. However, due to the fact that Africa’s top MMA athletes have been queuing for a place on this historic fight card, replacements have been found. Dino Bagattin will now face Michiel Opperman, while Ryan van Niekerk will face Nigeria’s Steven Momah. This brings the current number of fights to eleven, with a twelfth bout still to be announced.

Opperman replaces Martin van Staden, is currently on a 5-fight win streak at middleweight, and will make the cut to welterweight to face Bagattin. According to Opperman, the opportunity to fight a well-ranked welterweight was too good to pass up.

“It’s unfortunate about Martin being injured, but when this fight was offered to me I jumped at it,” said Opperman. “It could not have come at a better time because I trained through December in preparation for the Adu Dhabi All Africa Pro Trials and I began sharpening my striking three weeks ago. Coming down from middleweight, I should have a few advantages over Dino, namely reach, size and strength. I know Dino has fast hands and strong knees in the clinch, but I noticed a few things in his fight with Juan Lubbe that have helped me put together a strategy to deal with him. Dropping to welterweight is also a long-term career move for me. Last year I was side-lined due to injury just before my rematch with Donavin Hawkey, which put me right at the back of the middleweight pack. If I beat Dino, I’ll have a much quicker journey to title contention at welterweight.”

Bagattin welcomes Opperman as a replacement and looks forward to testing his versatile skill set.

“I’m really excited about fighting Michiel,” said Bagattin. “After sitting in suspense for two weeks hoping for a worthy opponent, things have finally worked out. Michiel is a great challenge for me as he’s been fighting consistently, he comes from a great team and he has head kicks that put people to sleep. I think fans are in for a treat because we both come from striking backgrounds so we’ll both be hunting a knockout. Even if this fight goes to the floor, as most MMA fights do at some stage, we’ve both been working hard on our ground games, as we saw with Michiel beating his last opponent by triangle choke. This is going to be a great fight and I can’t wait to shake off my ring rust on the march to the title.”

“I know Ryan is a good fighter and I respect him for that,” said Momah. “He was or still is a lightweight champ at another organization, but that means nothing when you enter the EFC cage, because it’s a different level altogether. For me, this isn’t just another fight; it’s a start for my new team, Dragon Core MMA, and for my country Nigeria. It means more to me than anyone can understand. We are both coming to fight hard, so it won’t only be a good fight to be in, but a good fight to watch!”

Van Niekerk says the change of opponent does not bother him in the least as he has been preparing hard for his EFC AFRICA debut.

“I know I’ve trained hard and I’m fit, ready and mentally prepared,” said van Niekerk. “I’ve heard that Steven is a very good stand up fighter and kickboxer, which suits me just fine because I like to stand and bang. I trust he’ll be fit and strong, which makes me determined to break him in the cage. I’m ready for EFC 12, bring it on!”