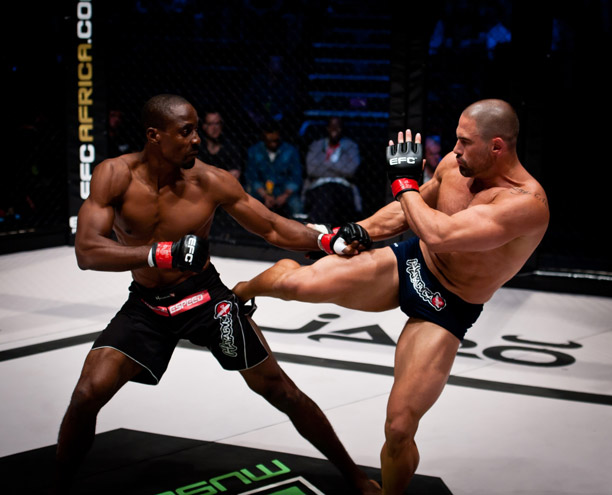 Johannesburg (South Africa) – Due to a knee injury in the final days of training for EFC AFRICA 12, Tumelo Maphuta has been forced to withdraw from his scheduled bout with Sean Robinson on 2 March. Fortunately a replacement has been found, and Robinson now faces a rematch with Nigeria’s Raymond Ahana.

When the two first fought at EFC AFRICA 08 at Carnival City in April 2011, Robinson emerged victorious after three rounds of closely contested action. Ahana relishes the opportunity to avenge the loss.

“It’s unfortunate that our rematch is last minute, but I am prepared and ready for my second fight with Sean,” says Ahana. “The last fight came down to points and I lost narrowly, this time I want to prove that I am better, and take Sean out hard and fast. My new team has given me everything I need, including ground work, so I’m looking like a better all-round fighter and aiming for the title this year! Bring it on!”

According to Robinson, the change of opponent brings pros and cons, but he’s put in far too much hard work to stop him going all-out for victory no matter who he faces.
“I’m disappointed that Tumelo is off the card because I was really looking forward to fighting him. An injury is never good news; I know because I’ve been there, so I wish Tumelo a speedy recovery. As for fighting Raymond again, I’m actually quite excited because I get to compare apples to apples: I get to look at the performance in my last fight against Raymond and see how I’ve improved since moving up to Gauteng and changing my training program. I expect Raymond to bring nothing less than another 15 minute war from his side, but this time the chances of me ending things with a knockout or submission are much higher.”