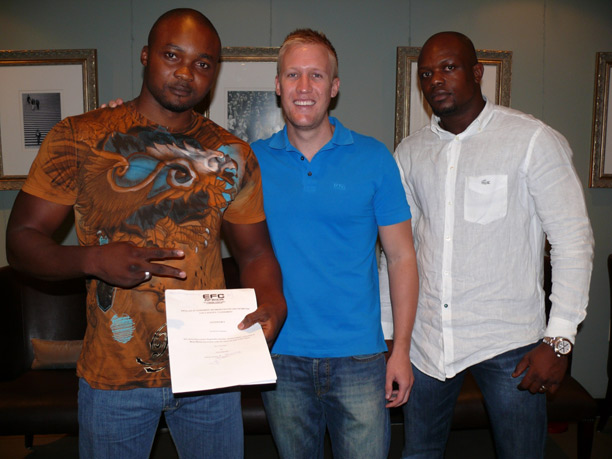 After a highlight reel finish that earned him Knockout of the Night at EFC AFRICA 12, Ricky Misholas is hot property in the heavyweight division. EFC AFRICA is pleased to announce that the Apocalypse will be coming to Cape Town in April, where he hopes to take another step closer to title contention.

“I was so excited about finally making my EFC debut,” said Misholas. “I’d signed to fight at EFC almost two years ago and had to wait for an opportunity to fight, so I was really privileged when I got my chance. Walking out in front of thousands at Carnival City and probably millions on TV is not an easy thing. The pressure is hectic, but it’s exciting pressure!”

According to Misholas, the second round win was exactly what he’d planned, although getting to it wasn’t easy. “I’d been telling everyone that I was going to finish this fight in the second round. I’d had such a strong training camp that I knew I was not going to lose, that’s why I was so confident and dancing in the cage. But Paul is not a small boy and he’s no Mickey Mouse fighter! He’s someone that I’ll always respect because he’s got strong hands and a huge heart. Getting into the EFC cage is not an easy thing, and the fact that EFC signed Paul already meant he was a warrior. The first round went well but it was tough. When I had Paul in that choke I was so sure the fight was over but he just wouldn’t tap! I was like ‘What’s going on here?!’ and I knew that I was going to have to finish him with stand-up, not a submission. When we went into round two I’ll be honest, I was feeling a bit out of it. Paul wasn’t the only one that was sick, I’d had flu before the fight and my fitness wasn’t where it should have been. But, as a warrior, I just had to find the heart of the lion and carry on. I knew I had a strong right hand, even Francois Botha told me that when I was helping him prepare for his fight with Flo Simba. He said ‘You’ve got the reach and got the power, so use that right every chance you get.’ I set up Paul with the jab and finished him with the right bomb. As soon as I hit him I knew the fight was over, I didn’t even need to look back at him, I started celebrating immediately.” 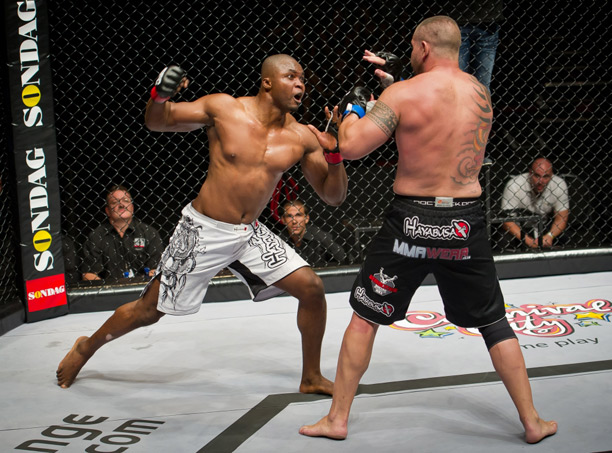 Misholas’ brutal power will be on display on 13 April at EFC AFRICA 13, EFC’s first ever event in Cape Town. More info on his opponent will be released shortly. “I want the fans to know that I’m not here to play around. I’m coming to prove a point. I know where my weaknesses are but I’m working hard to become a strong all-round fighter and I want to get the title. Ruan Potts is the champion and he knows how to fight; he can roll and do the whole business, but I believe I have the ability to become champion and I won’t waste any opportunities EFC AFRICA gives me. To get there I’m not just sitting in my house, I’m training hard with the same guys that helped me win against Paul. Thank you to my manager Dodo Mukadi, Hotbox Gym, Walter Wendt and all my training partners including Bernardo Mikixi and Zack Mwekasa.