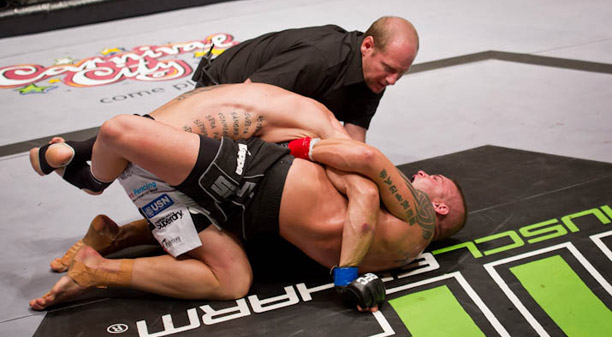 Johannesburg (South Africa) – At EFC AFRICA 12 on 2 March, EFC AFRICA cemented its place in MMA history by making the world’s fastest growing sport available to millions of fans across the continent via live television broadcast.

Four of the evening’s main bouts from Carnival City’s sold out Big Top Arena went out live to 49 countries on e.tv, Africa’s largest English-language TV channel. Millions of viewers got to see Jeremy ‘Pitbull’ Smith dethrone Garreth ‘Soldierboy’ McLellan to become EFC AFRICA’s new, undisputed middleweight champion in the main event. 30 seconds into round four, McLellan shot for a takedown and found himself caught in a deep guillotine choke, prompting Carnival City to erupt with cheers for the titanic struggle and the new champion.

The event was also broadcast to Nu Metro cinemas across South Africa, and via live online-pay-per view streaming for EFC AFRICA fans around the world.

According to EFC AFRICA president Cairo Howarth, EFC AFRICA’s first live broadcast on e.tv exceeded all expectations.
“The most anticipated fight card in EFC AFRICA history lived up to the hype and delivered everything we’d hoped for and more. What an event for our first live television broadcast on e.tv! Next up, we can’t wait for EFC AFRICA 13 where we plan to blow Cape Town away!”

Fight of the Night went to Garreth McLellan and Jeremy Smith for their back-and-forth tussle which ultimately determined EFC AFRICA’s new middleweight champion. Both fought their hearts out and had the crowd chanting and cheering, creating incredible atmosphere.

Knockout of the Night went to Ricky Misholas, whose heavy hands dispatched Paul Kietzmann in a heavyweight bout that will feature on highlight reels for years to come!

Submission of the Night went to JP Kruger, whose EFC AFRICA and pro MMA debut showcased incredibly high-level jiu-jitsu, especially from an athlete previously known only for his strikes.