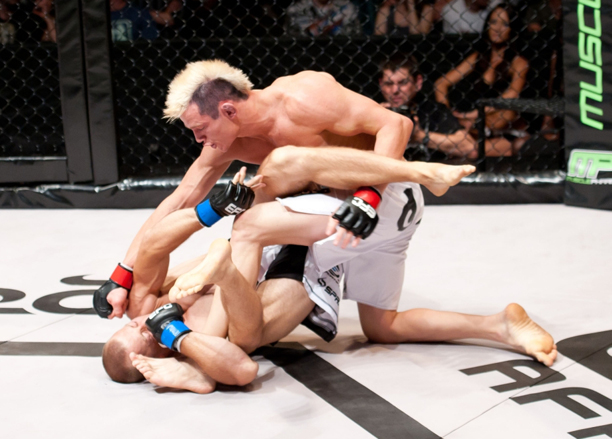 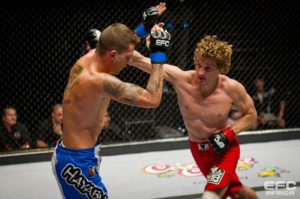 Johannesburg (South Africa) – Not only will EFC AFRICA 13 feature the welterweight division’s most important fight yet (Dallas Jakobi vs Jadyson Costa for the welterweight title) it will also feature another massive welterweight war as Martin van Staden and Michiel Opperman clash to decide who is next in line to challenge the champion.

Opperman is fresh off a huge win at EFC AFRICA 12, where he defeated a top 5 ranked welterweight, Dino Bagattin. After a tough first round of aggressive boxing, Opperman secured a tight triangle choke and forced Bagattin to tap out. The high profile win shot Opperman straight into a top 5 position on his welterweight debut.

“I was happy with my win at EFC AFRICA 12, although I did feel a bit slow and my boxing wasn’t where it should have been. On the plus side, I was in control most of the time and I was able to finish the fight when I wanted to. Since then I’ve been working on my boxing so that I will have more explosive, accurate hands when I face Martin at EFC AFRICA 13. Martin is a good fighter with a lot of experience, but I’m not sure how he’s coping coming off the injury that made him pull out of the fight with Dino. Martin is stronger and more aggressive than Dino so I expect new challenges from him, and this fight will probably go all over the show with us standing and banging, then rolling a bit and really getting stuck into it. I’m fairly new to EFC AFRICA and very new to the welterweight division so people are still getting to know me, but I’ve been working really hard for a long time to get this far. I’ve won about 10 fights in a row so the opportunity to face Martin didn’t just fall out of the sky. I’m really grateful to have another big fight at EFC AFRICA so soon, and hopefully this will take me one step closer to the welterweight title.”

Martin van Staden, also a top 5 ranked welterweight, has been working his way to a title shot for quite some time. Opperman will very likely be the last hurdle, and van Staden promises a decisive win to prove once and for all that he should be the number one contender.

“Since the neck injury that forced me out of the fight with Dino, I’ve been seeing a physio twice a week and my recovery has gone very well. I eased back into training two weeks ago, and now that the fight with Michiel has been confirmed I’ve really picked up the tempo. I only have three weeks of hard training left but I’m confident that I will be 100 percent ready by fight night. I saw the fight between Michiel and Dino and they had a good fight, but Dino didn’t respect Michiel’s ground game enough and that’s why he got caught. Michiel will be an interesting opponent for me because he’s a good stand-up fighter with a decent ground game; he’ll be tough to put away but I have a lot more experience in the cage so I believe I can finish him. Although I respect his skills, I don’t think they are of a high enough level to beat me if I apply the correct game plan. I’ve already won three fights in a row at EFC AFRICA and if I can take another win at EFC 13 then I’ll finally get the title shot I’ve been after. I want that belt and Michiel is in my way, so he better be ready to fight.”