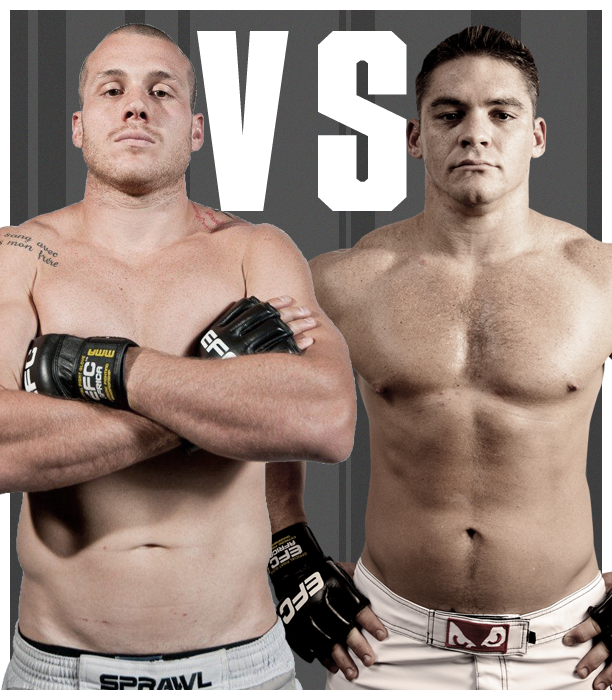 Johannesburg (South Africa) – The EFC AFRICA light heavyweight division is the only division that does not yet have a champion, which means that the race to the title is still anyone’s game. Two contenders with huge potential are knockout machine Dain ‘Sandman’ Neveling and former heavyweight champion Norman ‘Chef’ Wessels, both making their light heavyweight debut at EFC AFRICA 13.

Known for his heavy hands, Neveling has enjoyed a productive training camp at Durban’s GBH (Gorgeous Boyz Hardcore) MMA gym. With just two weeks to go, he is confident that the underdog will be able to take a chunk out of the former champ. “The way I see it, I’ve got nothing to lose,” says Neveling. “Taking this fight for my EFC debut means I don’t have to beat around the bush with lesser opponents. I know I’m the underdog but I’m coming prepared, so when I beat Norman I’ll be in a great position in the division. What do I know about my opponent? Well I know he likes to cook, but other than that I don’t know too much about him. I’m not going in worried about what Norman’s bringing to this fight; I’m preparing according to my strengths, not his.”

Both athletes have made the cut from heavyweight to light heavy for this bout, and Neveling says he’s never felt better. “Funnily enough, I’m actually stronger now than I was at heavyweight. I’ve really enjoyed preparing for this fight, even the weight cut, as it’s all been part of setting and achieving a goal. I’m now at 100kg and I’ve only got a few more kilos to go before the water cut. One thing I lacked in the past was fitness, but I’ve worked hard to rectify that. I’ve improved every aspect of my game and I believe I’ll be a completely different fighter when I step into the EFC cage. GBH has an almost military sense of training and discipline, and the amount of champions GBH has produced (including current EFC AFRICA welterweight champion Dallas Jakobi) speaks for itself.”

However, to start on the path to the light heavyweight championship, Neveling will have to defeat a former heavyweight champion. Norman Wessels lost his title to Ruan Potts in June 2011, and now he’s determined to make an impact against smaller opponents. “I don’t put the loss of the title down to Ruan’s skill, but rather a case of MMA being MMA,” says Wessels. “For quite a while I was dead keen on a rematch, but when I went to train in Canada at the end of 2011 the first thing they said to me as I walked into the gym was ‘You’re too small to be a heavyweight.’ Training with some of the best MMA athletes in the world verified that. My move to light heavy was a simple case of physics: I’d rather be a big light heavyweight than a small heavyweight. The drop to light heavy hasn’t been tough at all, it’s been very natural over the last three months. I haven’t adjusted my diet very much, just tweaked my training to take out a few strength sessions and substitute them with endurance and conditioning drills. I haven’t lost any power, I’m just faster and more agile with a better gas tank.”

Unlike Neveling, Wessels is very aware of the strengths and weaknesses of his opponent, and he has tailored his game plan to match. “Dain’s a brawler, pretty much a one-trick-pony, but he’s very good at that one trick. He’s had some success outside of EFC by rushing in with a big overhand right, then following up with another one, but I don’t think he has the skillset to be successful in this bout. However, I’m not taking him lightly by any means; I’ve done my homework and studied him because of the threat he poses, but what I have to worry about and what Dain has to worry about are worlds apart.”