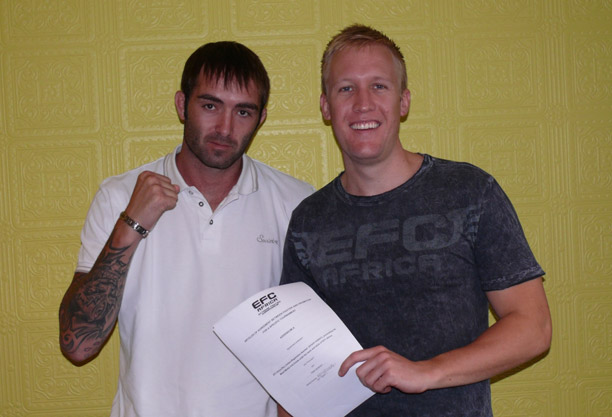 Johannesburg (South Africa) – With a first round victory at EFC AFRICA 12, Wade Henderson secured his spot at EFC AFRICA for another 18 months. Although the veteran was on shaky ground heading into the bout with Josh Muller on 2 March, the win allowed him to retain his place at Africa’s premier mixed martial arts promotion.

“I went into that fight pretty confident because I knew I’d already beaten Josh at weigh-in,” says Henderson. “I could tell during our stare-down that he didn’t want to get into the cage with me. On fight night he rushed me, but I was expecting that and it just switched me on. I don’t remember much besides dropping my hands and toying with him. If I tried that against a half decent fighter I would have been slaughtered. My experience kicked in and from there I overwhelmed him. As soon as I had a solid mount he gave me his back and I knew the fight was done. I hit him once or twice and the ref was probably just about to stop it anyway, but Josh gave the verbal submission. It surprised me how easily he gave up because I thought he had more heart than that.”

“After the fight with Josh I was happy to shake his hand because I grew up in a time when, if you had an issue with someone and you fought about it, you’d shake hands afterwards and it was done. I’m not surprised that Josh was cut from EFC AFRICA after his last two performances, but I have no doubt he’ll work his way back and be stronger thanks to the experience. He has potential and I definitely felt an improvement in his boxing, but he needs to go train with some real men.”

Henderson will be back in action at EFC AFRICA 13 in Cape Town on 13 April. He re-enters the middleweight division against James Le Roux and looks forward to another shot at working his way through the ranks.

“I’ve been thinking about moving back up to middleweight since the fight with Jadyson Costa. I don’t like cutting weight and I have to lose 10kg to make welter, so I’m heading back to middle where I’m more comfortable and more powerful. Middleweight is definitely a stacked division and it’s got plenty of fresh new talent, so it’s an exciting place to be. It’s also pretty cool that my best friend Jeremy is the champ, so I’m going to try to work my way up to a fight with him; it’ll be just like another hard sparring session between us! I don’t know too much about my next opponent, James Le Roux, but he seems like a solid fighter who’s not scared to stand and trade, which is what I want. I guess I’ll have to re-watch his fight with Chett Meyer, but it’s going to be exciting to fight him in his own back yard in Cape Town.”