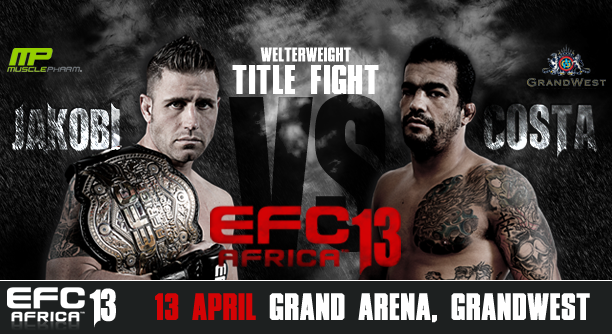 Johannesburg (South Africa) – With EFC AFRICA’s first ever Cape Town event just around the corner, there is no better time to get to know the Cape’s finest mixed martial arts athletes, who will be fighting in front of their hometown fans.

Jadyson ‘Little Wanderlei’ Costa
Age: 30
Record: 12-12
Division: Welterweight
Fights out of: African Top Team
Originally from Parana, Brazil, Jadyson Costa came to South Africa in early 2011 to teach Brazilian jiu-jitsu and also pursue his other love, surfing. Besotted with the Cape’s natural beauty and friendly, cosmopolitan culture, Costa decided to stay for good. He became an MMA instructor at Pride Fighting Academy in Gardens, Cape Town, and put his skills to the test by joining Africa’s biggest MMA promotion, EFC AFRICA. Costa has defeated two opponents at EFC AFRICA so far; first was Wade Henderson at EFC 10, then James Rennie at EFC 11. He faces welterweight champion Dallas Jakobi at EFC 13. If successful, he will become the new EFC AFRICA welterweight champion. His nickname ‘Little Wanderlei’ comes from his fighting style, which is similar to that of former Chute Boxe teammate and world-renowned MMA athlete Wanderlei Silva.

Don ‘Magic Man’ Madge
Age: 21
Record: 1-0
Division: Lightweight
Fights out of: African Top Team
Don Madge may only be 21, but he is already one of the world’s top Muay Thai fighters. He has had over 50 fights in Muay Thai and K1 kickboxing and has only ever lost twice, both times to the Muay Thai world champion. Madge crossed over to MMA in 2010 in order to capitalise on the sport’s popularity explosion in Africa and around the world. He runs his own gym, Phoenix Muay Thai & MMA. Madge has defeated one opponent so far at EFC AFRICA, Wade Groth, at EFC 11. He faces Leon Mynhardt at EFC 13.

Francois ‘The Frenchman’ Kabulu
Age: 23
Record: 5-2
Division: Welterweight
Fights out of: Panther Fighting Arts
Originally from the Democratic Republic of Congo, Kabulu now pursues his professional martial arts career in Parklands, Cape Town. He has fought at EFC AFRICA four times so far, beating Ashley Calvert at EFC 07, then Josh Muller at EFC 08, but losing to Leon Mynhardt at EFC 09 and Martin van Staden at EFC 10. Despite his two recent losses, Kabulu is well respected at EFC AFRICA for his toughness. He faces Dino Bagattin at EFC 13.

James ‘Jambo’ Le Roux
Age: 26
Record: 1-1
Division: Middleweight
Fights out of: African Top Team
A taxidermist by trade, Le Roux discovered MMA in 2007 and has been practising and competing in his free time since. He was undefeated as an amateur but met heavy resistance in his last EFC bout, EFC 04, against Chett Meyer. Le Roux hopes to bounce back from the second round TKO and has dropped from light heavyweight to middleweight, where he hopes to be fitter and more agile. He faces Wade Henderson at EFC 13.

Abrie ‘Bloody’ Valentine
Age: 30
Record: 0-0
Division: Middleweight
Fights out of: African Top Team
Valentine makes his pro MMA debut at EFC 13 after a great 7-1 amateur career. His only loss was to Paul Terblanche, who would eventually become his training partner at African Top Team. Valentine is a personal trainer and runs a men’s fitness company. He was originally scheduled to face Pete Motaung at EFC 13, but an injury forced Motaung off the card and Armand de Bruyn stepped in to take his place. De Bruyn has already had 3 fights at EFC AFRICA, 2 wins and 1 loss.

Alain ‘Commander’ Ilunga
Age: 21
Record: 1-0
Division: Lightweight
Fights out of: Panther Fighting Arts
Ilunga currently has one professional MMA win behind him, but this is backed up by 22 amateur bouts in K1 kickboxing, boxing and MMA. Although he comes from a kickboxing background, his last five MMA fights have been won by submission (i.e. choke holds and joint locks). He began MMA in 2011 specifically to compete at EFC AFRICA. He faces Johan van Staden (who is vastly more experienced with a 12-5 record) at EFC 13.