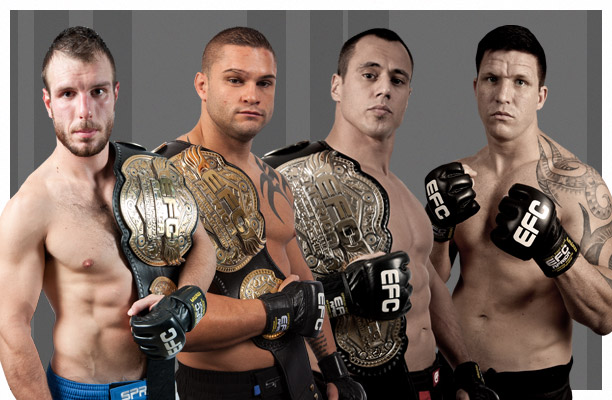 Johannesburg (South Africa) – EFC AFRICA 13 is almost here and opinion is sharply divided on whether Dallas Jakobi will remain EFC AFRICA welterweight champion when he faces Jadyson ‘Little Wanderlei’ Costa. A number of EFC AFRICA athletes were eager to give their professional opinions on all three main card bouts. To find out how these epic encounters really end, don’t miss EFC AFRICA 13 on 13 April at the GrandWest Grand Arena.

Below are some of the thoughts and predictions for the main event fights JAKOBI vs. COSTA, ROBINSON vs. MIKIXI, and MADGE vs. MYNHARDT

“Dallas is a really good guy and a great champ. I think he’s a lot stronger than Jadyson and where I can see him winning this fight is in the clinch. Both have fairly wild stand-up so I’m not sure who has the advantage there, but Jadyson’s experience means he will be more comfortable and technical on the ground. Dallas will probably start well, but I don’t think he’ll be able to withstand Jadyson’s submission attempts forever. This fight won’t go past the third round and, although I like Dallas, I think Jadyson wins this one.”

“If Leon fights like he used to fight, using all his tools, he has a good chance of winning. If he fights like he’s been fighting lately, I’d advise him to use his newly acquired wrestling and submission skills as they’ll help him do well. Leon is a lot stronger, especially on the ground, and he’s got some sneaky moves. As for Don, my only real worry is that fighting in front of his home fans and the bright lights might affect him. If he’s as cool as he was in his last fight he’ll be a superstar. I see this one going to a points decision in favour of Don.”

“Dallas is a great champion with a huge heart and determination. The constant development of his skills has been evident in his 4-fight win streak, and his fight against Adam Speechly was a prime example of this. Jadyson is a teammate whom I have the privilege to train with. His background speaks for itself: A true BJJ Black Belt who has trained with many legends of MMA. He is an exceptionally well-rounded fighter. If Dallas were fighting anyone else in the division I would give him the win, but his fighting style suits Jadyson perfectly and when you lay your hands on him you enter his BJJ black belt world and once you enter there is no escape! That’s why my prediction is Jadyson by submission in round 1.”

“These two heavyweights are both big strong guys. It is a hard one to call as both guys have one-punch knockout power. I can’t really say more than that. Conditioning and game plans will win or lose this fight. I believe if they simply stand and bang it could be Bernardo by TKO, if it goes to ground I think Calven will ground & pound the win. If I had to choose, I would say Calvin for the win by TKO round 2.”

“Well what can I say, two fantastic Muay Thai fighters! Leon has been around a while and has an impressive Muay Thai background in SA. He has recently added some BJJ to his game as well which makes him a dangerous well-rounded opponent. He has also dropped to lightweight which may or may not be an advantage, but he is coming off a two fight losing streak. Don is another teammate who I have had the privilege of sparring with. This 21-year-old is a machine. He has achieved huge success in Muay Thai both locally and abroad. I believe his stand up game is a level above anyone in his lightweight division. His BJJ is solid and I don’t believe Leon will really pose a threat in that area. My prediction is Don by TKO in Round 1.”

“Now this is going to be a great fight and I think it will be close, even though I don’t know Jadyson that well. Dallas is one of the nicest fighters there is, and very powerful, so I’d like him to win. He will be bigger and stronger, so if he can utilise that well, I think he’ll be ok. Jadyson has more experience and is very good on the ground, but it’s like the old saying goes, ‘If you punch a black belt hard enough, he becomes a brown belt.’ If Dallas is on form, he’ll punch Jadyson all the way back to white belt and neutralise his ground skills. I think Dallas will take it by 3rd round TKO, ground and pound.”

“Bernardo is an absolutely great guy, I’ve known him for ages and I can confidently say he’ll take the win. He might not look bigger, I mean Calven’s a giant, but Bernardo will be physically stronger and the better fighter. Bernardo by KO in Round 1.”

“This will be an amazing fight to watch and I really would have liked to be at the live event to see it! Spectators are in for an excellent show of Thai boxing from these two. Both are very tough so it’s hard to say. If Don can keep it standing I see him winning by second round TKO, but if Leon can get him to the ground I see him taking it by second round submission. It’s really tough to call this one so I’m just going with who I’m better friends with and saying I hope Leon wins.”

“From what I have seen, Jadyson is a cool, calm and collected fighter with an exceptional ground game that has seen him dominate his opponents thus far in his EFC match-ups. Jadyson’s fights have ended rather quickly so it’s hard to determine whether he would be capable of sustaining a 5-round onslaught. Dallas, on the other hand, is no walk over; he has the talent to not only spoil a fighter’s game plan but to beat them utilizing that same plan. His club, GBH, is renowned for their G’nP hit-and-not-be-hit tactics, which may be too much for Jadyson to handle over the full 25 minutes. I see Dallas taking the fight by G’nP TKO in round 4.”

“Two monsters in the cage, both with bad intentions. It’s always difficult to predict heavyweights as a single punch can literally end the fight. Bernardo has the credentials but looked rather sluggish in his last appearance with his trademark swings. Calven has been on a rampage pushing boundaries during his training sessions and fine-tuning his skills so he is coming 100% prepared for what Bernardo has to offer. Calven to take the fight in the 2nd round by G’nP TKO.

“EFC’s two Mauy Thai specialists going toe-to-toe. Don has his youth and fresh techniques, Leon has his experience and a point to prove coming off two losses. This is going to be a stand-up war and a crowd pleaser. From past experience, I predict Leon taking the fight with a 2nd round TKO.”