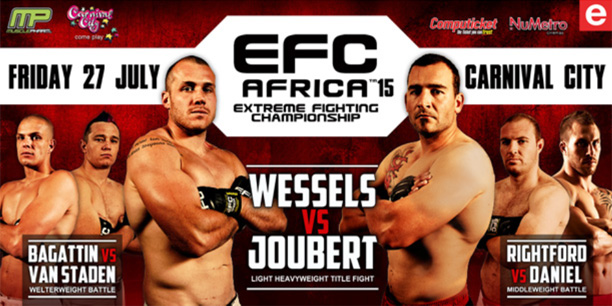 Norman ‘Chef’ Wessels, the former EFC AFRICA heavyweight champion, has been on a rampage since losing his title to Ruan Potts at EFC AFRICA 09. After training with some of the world’s best MMA athletes in Canada at the end of 2011, Wessels made the decision to slim down and become one of Africa’s hardest light heavyweight hitters. An intense, explosive and emotional bout against Dain Neveling at EFC AFRICA 13 proved Wessels’ theory that he’d be faster and more agile, as he sunk in a rear naked choke to win in just 2 minutes and 31 seconds. With a 5 win, 2 loss record, championship experience and a great start at light heavyweight, Wessels is a serious threat to the title. Wessels is 31 years old and fights out of Fight Fit Militia in Johannesburg.

JP Joubert had mixed fortune at heavyweight in his first few bouts at EFC AFRICA. After losses to Shaun Craig and Bernardo Mikixi, and a win against Danie van Heerden, Joubert decided to make the transition to light heavyweight, where he has picked up two wins in a row. His last bout was in September 2011 against Jeremy Scheepers where he won by blistering TKO in 2 minutes and 5 seconds. Joubert’s 3 win, 2 loss record makes him a qualified contender and he looks forward to his first EFC AFRICA title shot. Joubert is 30 years old and fights out of Team Mayhem in Ruimsig, Johannesburg.

Another of the evening’s most anticipated bouts will see Darren ‘Double D’ Daniel face off against Tyron ‘The Rush’ Rightford at middleweight. Daniel was idolised as one of EFC AFRICA’s top athletes two years ago as he built his 5 win, 1 loss record, but took a break from competition to rehabilitate an injury. Now he’s back and ready to take on a top contender. Tyron Rightford is on a scorching three fight win streak and has emerged as a devastating, undefeated striker. Daniel and Rightford have already traded insults online and fans expect this bout to be the evening’s most violent encounter!

Former light heavyweight powerhouse Chett ‘The Threat’ Meyer will meet Bluff bad boy Donavin ‘Bam Bamz’ Hawkey at middleweight. Meyer was widely held to be a strong prospect at light heavyweight with a record of 5 wins, 1 loss, but made the cut to a division where he will be naturally faster and more volatile. He hopes to rack up experience with wins against big names and has singled out Hawkey as the first on his list. Hawkey is a veteran in South African MMA with a record of 20 wins, 8 losses. He was respected as a top contender outside of EFC AFRICA but has had a win and a loss since joining Africa’s premier MMA promotion. A win for either athlete will put them in a favourable position in the middleweight rankings.

At welterweight, Martin van Staden and Dino Bagattin are hungry to improve their standings on the way to a title shot. Bagattin was defeated by Michiel Opperman at EFC AFRICA 12 but managed to rebound at against Francois Kabulu at EFC AFRICA 13, while van Staden fell victim to Opperman at the same event. Van Staden and Bagattin crave to crack the division’s top 3, but that will take a decisive victory. Both have dangerous boxing and have been studying each other for months, preparing for the inevitable clash.