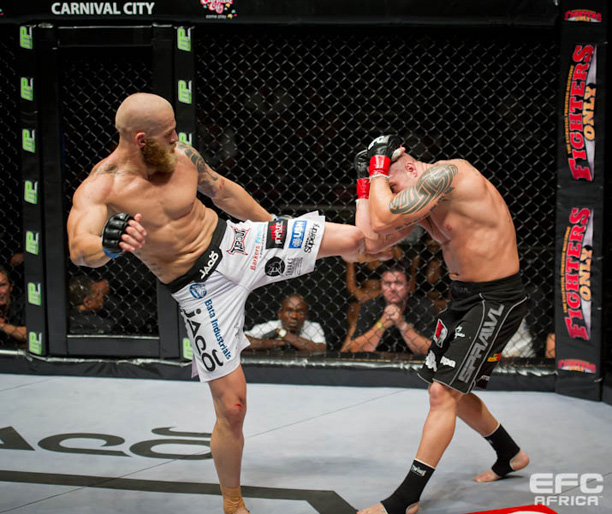 Johannesburg (South Africa) – Former middleweight champion Garreth ‘Soldierboy’ McLellan has one thing on his mind, getting his title back. The first battle in his campaign will be at EFC AFRICA 14 against another rising contender, Danie van Heerden.

“Danie’s a strong guy, he has a very positive attitude, he comes in hard and he’s not afraid to throw leather,” says McLellan. “For me, this fight is business as per usual, but I’ll be bringing back some of the old school Soldierboy that was lacking from my last bout. I’ve got a job to do and I’m going to do it properly. I wouldn’t say there was anything wrong with the way I approached the title fight with Jeremy, but usually I go into a fight with more intensity. When someone gets in your face it’s off-putting and they realise they’re in a real fight, and that’s what Danie is going to get. I was disappointed in myself when I took my foot off the pedal for EFC 13, but it won’t happen again.”

Van Heerden previously stated that he believes victory will be his because of better coaches. McLellan merely shrugs off van Heerden’s opinion. “Everyone who steps into the cage believes that their coach is the best, but even if you have the best coach, can you perform on fight night? We’ll have to see what his coaches have given him and whether he can execute his game plan correctly. If he’s based any part of that game plan on the Soldierboy that fought Jeremy, he’s in for a surprise.”