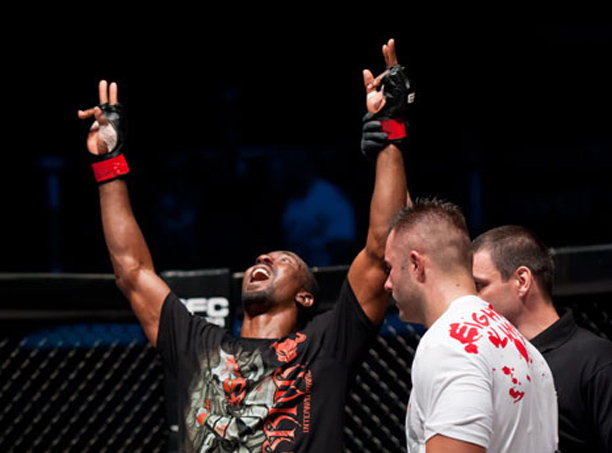 Johannesburg (South Africa) – Nigerian taekwondo terror Raymond Ahana is back in action at EFC AFRICA 15, this time against exciting kickboxing prospect Jason Culverwell. Ahana proved just how dangerous his kicks could be at EFC AFRICA 12, where he scored one of the evening’s most memorable finishes, a head kick TKO against Sean Robinson. EFC AFRICA caught up with Ahana’s coach Steven van Wyk while Ahana was away sharpening his strikes at a kickboxing tournament in Nigeria.

“A lot of homework has gone into the fight with Jason,” says van Wyk. “We know that Jason is a kickboxer but that he can also fight on the ground, after seeing his submission win in Cape Town against Mahmoud Salama. Ray is happy to have Jason as an opponent as it will be a good stepping stone in moving forward toward the title that Ray wants to have around his waist. Ray has been working extremely hard on jits and has shown in training that he can roll with the best on the ground. When he arrives in SA two weeks prior to the fight, he will be in the very capable hands of our good friend Wade Henderson, to continue his ground work, and will be working hard with boxing coach Leron Myles. We also have our great sponsor and friend Dave Da Costa doing his bit sorting out Ray’s weight and nutrition.”

“Ray is very confident of victory as he has one goal in mind: The title! He knows that victory will catapult him into what should surely be contention for the title, after an impressive TKO victory over Sean Robinson. That victory over Sean just proved what Ray can do with only a week’s prep, as he was a late replacement. When EFC 15 rolls around he will have had just under 2 months to prepare, so he knows, and everybody else knows, that nobody can stop him. He is on a war path to the title, and anybody that stands in his way will be dealt with very quickly.”