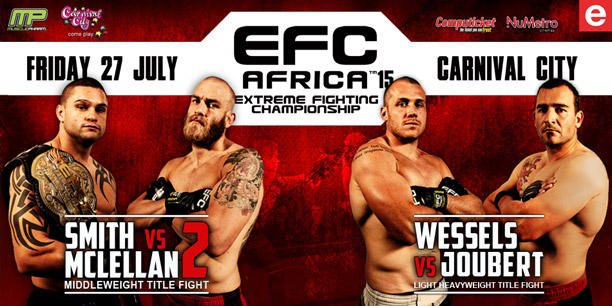 Johannesburg (South Africa) – Four more bouts have been added to the EFC AFRICA 15 fight card! With six weeks to go until Africa’s most prestigious MMA event, nine bouts have been confirmed, with another four still expected!

At middleweight, Armand de Bruyn faces Tumelo Maphutha. De Bruyn has been on a tear racking up three wins in a row since his debut loss at EFC AFRICA 7. Besides judo and submission wrestling, De Bruyn has also displayed a formidable array of strikes, making him an all-round threat and a hot prospect in the division. The bout will be Maphutha’s first at middleweight and he is hard at work making the cut from light heavy. Maphutha’s forte is K1 kickboxing and full contact karate, and he hopes to score a knockout to redeem his loss suffered at EFC AFRICA 11.

At welterweight, Nolan Swanepoel makes his hotly anticipated return to the hexagon! An exciting, perennial favourite, Swanepoel has shaken up his training in order to return to the top tier of the division. Facing him is David Buirski, an undefeated Muay Thai prodigy that announced his arrival at EFC AFRICA 13 with a stunning first round hammer fist TKO!

At light heavyweight, Nigerian taekwondo exponent Raymond Ahana hopes to score another highlight reel head kick finish when he takes on Jason Culverwell. However, Culverwell is a competent kickboxer and proved his ground skills with a keylock submission victory at his pro debut at EFC AFRICA 13.

At featherweight, boxing phenom Boyd Allen makes the cut to EFC AFRICA’s lightest division to face Alain Ilunga. Ilunga is fresh off a successful debut at EFC AFRICA 14 where he proved how effective his strikes can be. Both have impressive stand-up credentials, so expect a feast of painful impacts!