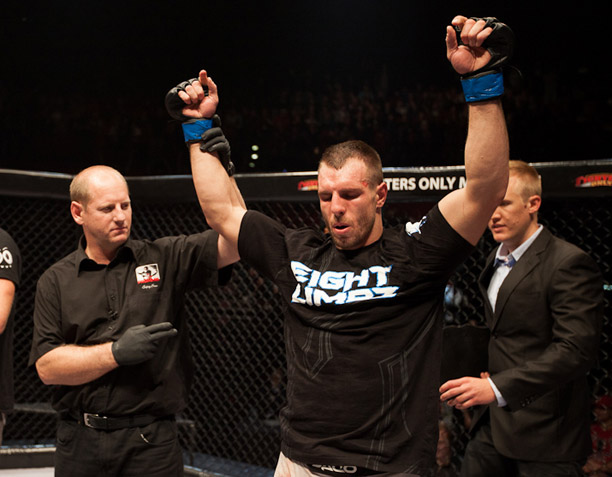 Johannesburg (South Africa) – At EFC AFRICA 14 on 1 June, the main event of the evening exceeded all expectations as Costa Ioannou and Adam Speechly had an action-packed championship battle for 5 rounds. Despite evident fatigue, Ioannou managed to retain the EFC AFRICA lightweight title via unanimous judges’ decision.

“I loved the fight!” says reigning champ Ioannou. “Mentally and physically I felt much stronger than usual and I was able to stick to my game plan. Everything I’d worked on in training worked perfectly until I got tired toward the end of the second round. I began to feel really exhausted, and not in a way that I usually do. Sometimes my arms get a bit heavy but I can deal with that, in this case it was my heart, which started palpitating.”

According to Ioannou, even though he faced unexpected challenges, he wouldn’t have had the bout any other way. “I’m so thankful that everything happened the way it did, so that I could prove to myself and everyone else that I could dominate a guy who I respect as one of the top fighters in Africa, for the majority of the fight even though I had zero gas in the tank. When I was on the bottom I didn’t feel in danger once, I was just too tired to improve my position. The only worry I had was getting cut, but I managed to get through the fight without any damage. I’ve always rated Adam as a top-notch fighter and he brought his A game and fought just as hard as I thought he would. From fighting through that cut, to escaping my rear naked choke, which I still have no idea how he managed to do, to pushing through his own fatigue, he showed the heart of a champion.”

After defending the title there was little time for celebration, as Ioannou still had to undergo post-fight medical checks and speak to the press. “I then went straight home, had a 2-minute shower and got into bed at 4:38am. The next day I had a quiet dinner with family to say goodbye to my brother who came over from Cyprus especially for my fight. Now I’m going to see a doctor and have some blood tests done to see if we can pinpoint why I was so tired in the fight.”

Ioannou remains at the pinnacle of Africa’s lightweight division for now, but it’s inevitable that even tougher challenges will emerge in the EFC AFRICA hexagon!

EFC AFRICA returns to Carnival City on 27 July for EFC AFRICA 15. Tickets on sale at Computicket www.computicket.com and tickets for the live broadcast to Nu Metro Cinemas available at www.numetro.co.za The three main card bouts will be broadcast live across Africa on e.tv, starting at 22h30 CAT. Full event streamed live online.