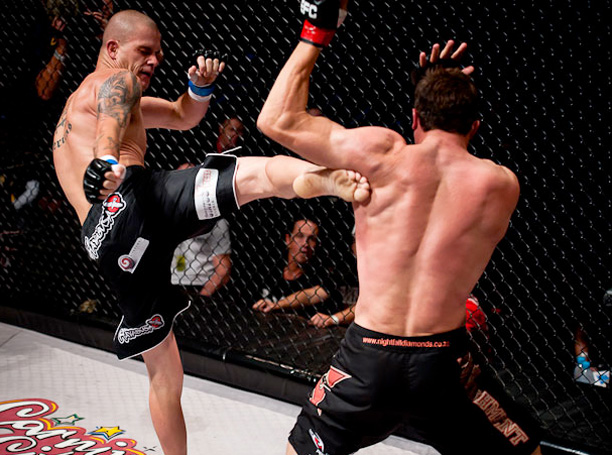 Johannesburg (South Africa) – Dino ‘The Lion’ Bagattin and Martin ‘The Punisher’ van Staden step into the EFC AFRICA hexagon this Friday to finally determine which welterweight warrior is the harder hitter. Van Staden was once a typical heavy handed brawler while Bagattin was a one-dimensional Muay Thai striker, but both have taken massive steps forward to become well-rounded MMA athletes. However, both still base their fighting styles around strikes, which is why MMA fans hungry for a slugfest are already salivating.

“I’ve had a great fight camp and I’m feeling strong,” says Bagattin. “I’ve been building my strength for this fight because I know Martin’s a strong boy who’ll be trying to push me around. I’ve been working hard for eight weeks, although I actually entered my fight camp fit and strong already, and I’ve only improved. Right now all I want is to get to the business end of my fight camp so that I can step into the cage with Martin.”

This is the third time Bagattin and van Staden have been scheduled to clash. On both prior occasions the bouts were cancelled due to injury.
“It’s third time lucky! I think Martin and I have been training in cotton wool for this one making sure that we don’t get injured before the fight. Luckily we’ve both managed to make it this far and it looks like the fans are finally going to get the fight they’ve been waiting for, an explosive war! I’m sure Martin’s coach, Richie Quan, has put together a ‘Dino Manual’ that they’ve been studying, but I’m an evolving fighter and I’m going to have a few surprises in store. The way I see it, Martin’s going to try to take me down. He won’t want to stand with me, so he’ll try to bully me with strength and ground ‘n pound. But I’m ready to prove that I’ve got an all-round MMA game including wrestling, submissions and plenty of Smiths boxing. I’ve had extra help with my ground game from Wiekus Swart at Tapout Academy. He’s helped fill the holes in my ground game and I promise no one’s going to submit me with a triangle or rear naked choke again. I’ve even been submitting a few big names in the gym!”

According to Bagattin, a win over van Staden will most likely earn him a title shot in the welterweight division against whoever holds the belt at the end of 2012. The title is set to be contested between current champ Jadyson Costa and challenger Michiel Opperman in October, and Bagattin believes he has a good chance of facing and defeating the winner.
“I’ll be rooting for Michiel because I want the belt around a South African waist, but I’ll be happy to face either of them. If I fight Michiel I get the rematch I want to avenge my last loss, if I fight Jadyson I get to take on a jiu-jitsu black belt. I haven’t seen anyone properly test Jadyson yet, he hasn’t been under enough pressure, but I believe I can beat him.”