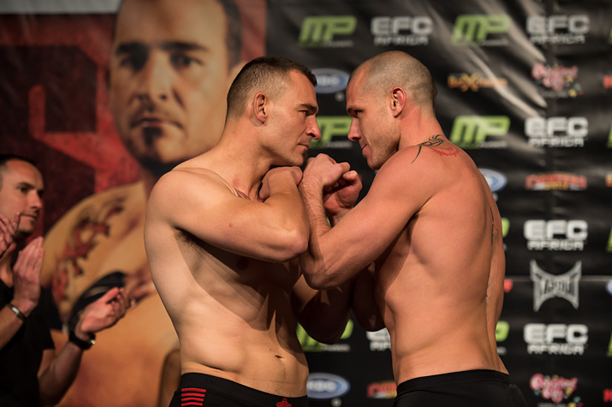 Johannesburg (South Africa) – Glares turned to all-out hostility at EFC AFRICA 15 weigh-in at Carnival City on 26 July, just one day ahead of Africa’s biggest mixed martial arts event. 26 top MMA athletes from around Africa locked stares, and more than a few shoves, insults and aggressive hand gestures were exchanged. Judging by weigh-in reactions, by the time the first bout commences at 17.40 on 27 July, intensity will be at boiling point!

In the middleweight division, former champion Garreth McLellan attempted to steamroll his opponent, Armand De Bruyn, after both made weight. McLellan butted heads with his opponent and kept moving forward, forcing officials to pull McLellan and De Bruyn apart.

Light heavyweight title contender JP Joubert weighed in 400 grams overweight, but had 2 hours to cut to 93kg, which he did successfully. “I’m on top of my game and fit as a fiddle,” said Joubert.
Opposing title contender, Norman Wessels, made weight and simply stated “I just wanna f**king kick his ass man!” 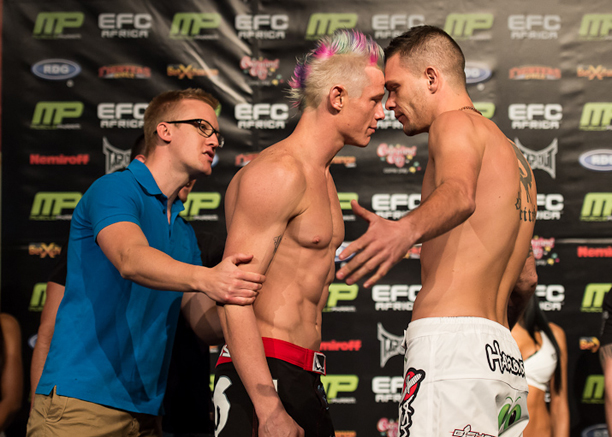 Welterweight stand-outs Dino Bagattin and Martin van Staden seemed close to blows during their face-off. Bagattin shoved van Staden, who was keen to respond just before officials stepped in. They promised to settle their differences in the EFC AFRICA hexagon on 27 July. 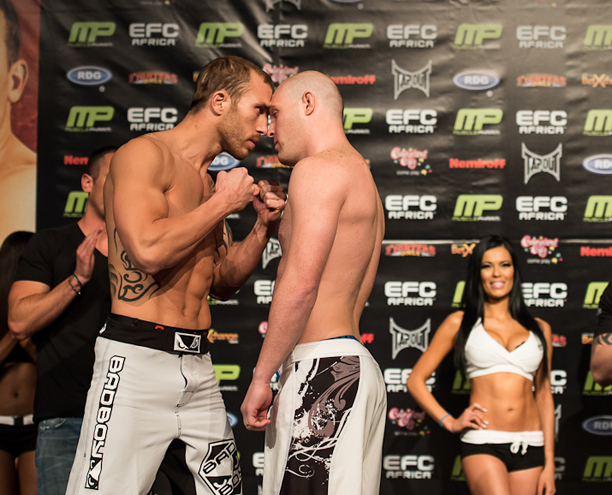 At middleweight, fierce rivals Tyron Rightford and Darren Daniel kept their composure but did exchange words, promising grievous bodily harm. Pressure is on for both to back up the insults that were traded over Twitter in the weeks leading up to the event.

To find out how these thrilling match-ups conclude, watch EFC AFRICA 15, presented by MusclePharm, at the Carnival City Big Top Arena on 27 July. Tickets on sale at Computicket www.computicket.com and tickets for the live broadcast to Nu Metro Cinemas available at www.numetro.co.za. The three main card bouts will be broadcast live across Africa on e.tv, starting at 22h40 CAT.