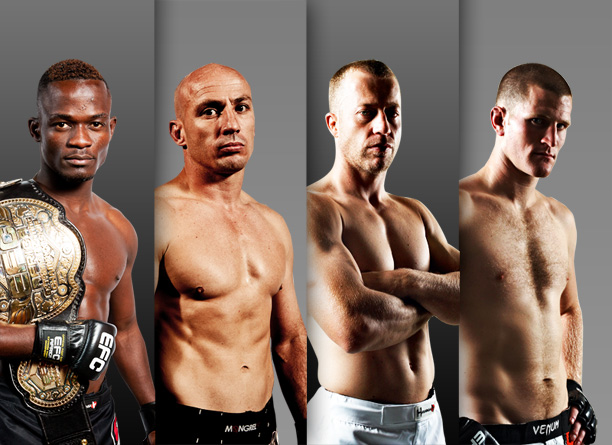 Johannesburg (South Africa) – EFC AFRICA 15 is almost here and opinion is sharply divided on whether Norman Wessels or JP Joubert will become EFC AFRICA’s first light heavyweight champion. A number of EFC AFRICA athletes were eager to give their professional opinions on the evening’s three main card bouts, plus one additional bout that they are personally looking forward to. To find out how these epic encounters really end, don’t miss EFC AFRICA 15, presented by MusclePharm, on 27 July at the Carnival City Big Top Arena.

Below are some of the thoughts and predictions for the main event fights WESSELS vs. JOUBERT, MCLELLAN vs. DE BRUYN, AHANA vs. CULVERWELL and more!

Wessels vs. Joubert
“Of course people are going to think I’m biased because I train with Norman, but having been able to train with him and see the amount of effort that he puts in, there’s no way I can see JP taking this fight. I have great respect for JP as a fighter, but I say Norman wins by 2nd round submission.”

McLellan vs. De Bruyn
“Armand is a young lion who wants to prove himself, and he’s already done a lot to prove himself. On paper Garreth is the favourite due to his experience and the fact he was champion. I know that Garreth isn’t taking Armand lightly because he’s so motivated to get his belt back. I don’t think Armand is ready for that. Garreth wins by TKO, round 2.”

Ahana vs. Culverwell
“Raymond has really proven himself lately; what a great performance against Sean Robinson! Ray is a lot more motivated than before and that’s why he’s going to win. I’m not sure how exactly so I’ll say he wins by judges’ decision after 3 rounds.”

Bagattin vs. van Staden
“This fight is going to be a firecracker! I haven’t known Martin that long, but in his last fight, against Michiel Opperman, it seemed something was missing. But now, for Dino Bagattin, I can see the fire in Martin’s eyes! He’s so ready to beat someone up! This is my pick for Knockout of the Night, with Martin doing the knocking! 2nd round KO.”

Wessels vs. Joubert
“On technical skills you have to give this fight to Norman. However, if JP comes out swinging like he did in his fight with Jeremy Scheepers, then there’s a possibility he will catch Norman. Then again, if Norman’s as brutal and technical as he was in his last fight, with Dain Neveling, he’ll beat JP. I see this fight going into the third round, Norman getting mount and JP escaping the wrong way, giving up his back and falling into a rear naked choke.”

McLellan vs. De Bruyn
“Yoh! This is a tough one, I’d say just about 50/50. I saw these guys fight as amateurs and they were even Steven through most of the fight. I don’t think Garreth will be able to submit Armand, but he could land a straight right or head kick KO. I know Armand has raised his game for this huge opportunity and I think he is capable of winning. I’m going to go with my gut and say Armand pulls off his first big EFC upset. Winner on points after 3 rounds.”

Ahana vs. Culverwell
“I know both fighters and I just spent the last 3 weeks helping Jason with his wrestling. I think Jason will take it, the oke is strong! Unless Ahana can pull out another head kick like he did against Sean Robinson, I see Jason taking this, on points.”

Mynhardt vs. Cheboub
“I’m going with Alex to take Leon down and submit him, probably in the second round. I base this on Alex’s superb ground skills and control. On the mat, I think he’s technically superior to most guys at EFC. Alex pulls flashy moves out of nowhere, especially when he’s getting beat up. I’ve never seen him win when he’s ahead; he always manages a crazy fight-ending trick when it looks like he’s practically at death’s door.”

Wessels vs. Joubert
“This is a very difficult one to call. Norman is very strategic but JP comes in with a lot of heart. That’s not to say Norman doesn’t have heart though! These guys have very different strong points so it’s hard to weigh them up. I see this fight going all the way to the score cards, with Norman coming out on top.”

McLellan vs. De Bruyn
“Garreth is going to take it, probably by 1st round TKO. Garreth brings a lot of focus, he’s got a lot of pro experience and, at the end of the day, he’s got a better team. I don’t want to take anything away from Armand, I just don’t think he’s been competing at this level long enough to withstand Garreth.”

Ahana vs. Culverwell
“I want to see Raymond win this fight and I think he will. It won’t be easy though, so I say he takes it by judges’ decision after 3 tough rounds. Raymond’s clearly been putting in a lot of effort and he’s a very respectful fighter. His win over Sean Robinson showed his abilities, and we know he has a big gas tank and heart.”

Rightford vs. Daniel
“Tyron has devastating one punch KO power and the ability to change the course of a fight in an instant. He’s also been training in Brazil, with top MMA fighters. However, I still think Darren will take this. Darren’s had a long time out of the cage but I believe he’s managed to get his composure and warrior spirit back. This might end by submission, but I think TKO is likely, 2nd round.”

Wessels vs. Joubert
“I think Norman’s going to be even more comfortable at light heavyweight this time so he’s going to come out strong and we’re going to see a different Chef. As for JP, he’s been improving his ground game with Mark Robinson for quite a while, and his striking is all there, so he’s definitely got a crack at the title too. The question is who’s going to be able to impose their game plan on the other? I think Norman takes it by submission in the 2nd.”

McLellan vs. De Bruyn
“Armand came to EFC and lost to Liam Cleland in his first fight but has come back from that very well. He’s won his last fights in spectacular fashion and I think he’s coming to make a statement. However, Garreth has experience on his side and he’s gone into the championship rounds before so he’s done his hours in the deep end and come out stronger than before. I expect a competitive fight but Garreth will grind out a decision victory.”

Ahana vs. Culverwell
“Raymond has fought big, strong guys before. What impresses me about Raymond is that he took Sean Robinson to a decision in their first fight, then beat him decisively in the rematch, which shows he can outmanoeuvre big, strong opponents. Anything could happen, but I say Raymond gets the decision.”

Bagattin vs. van Staden
“This is a big platform for both and I believe they’re at similar levels in their games. In a lot of ways, I see this fight as being between two reflections of the same fighter. Martin’s a tough boy who won’t give up a finish easily, but I think Dino’s done enough to get to a decision and have his hand raised.”