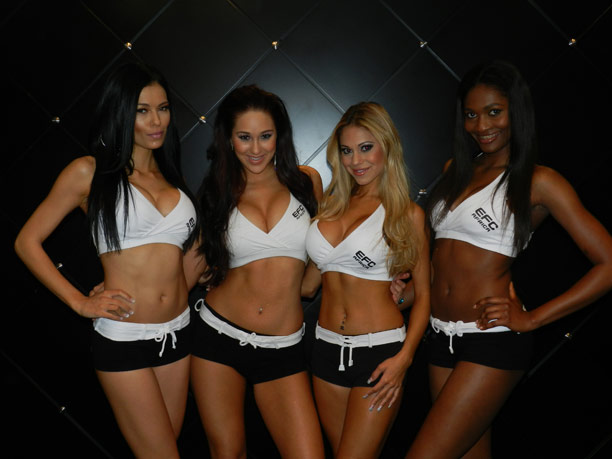 Johannesburg (South Africa) – EFC Girls Victoria, Riana, Eno and Naomi can’t wait for EFC AFRICA 15 on 27 July. With each event, the four stunning cage-side attractions increase their MMA knowledge and become even more excited about Africa’s biggest MMA extravaganza. Here are the bouts from EFC AFRICA 15 that they are most looking forward to:

Victoria – Norman Wessels vs JP Joubert & Martin van Staden vs Dino Bagattin
“I’m really looking forward to the light heavyweight title fight. Norman dominated in his first light heavyweight fight and I want to see if he brings the same intensity again. I also want to see Dino vs Martin because I’m a big fan of both and their stand-up skills are great.”

Riana – Darren Daniel vs Tyron Rightford
“I’ve been following Darren Daniel’s career for a long time so I’m really excited to see him back in action. It should be a really exciting fight because both athletes are so explosive.”

Eno – Raymond Ahana vs Jason Culverwell
“It’s really exciting to have a fellow countryman from Nigeria on the main card. I know Raymond has good kickboxing and I hear that’s what Jason is good at too. May the best man win!”

Naomi – Garreth McLellan vs Armand de Bruyn
“This is a really big fight for the middleweight division. Armand’s been doing so well and come on, who doesn’t like watching Soldierboy fight? I think it will be Fight of the Night.”