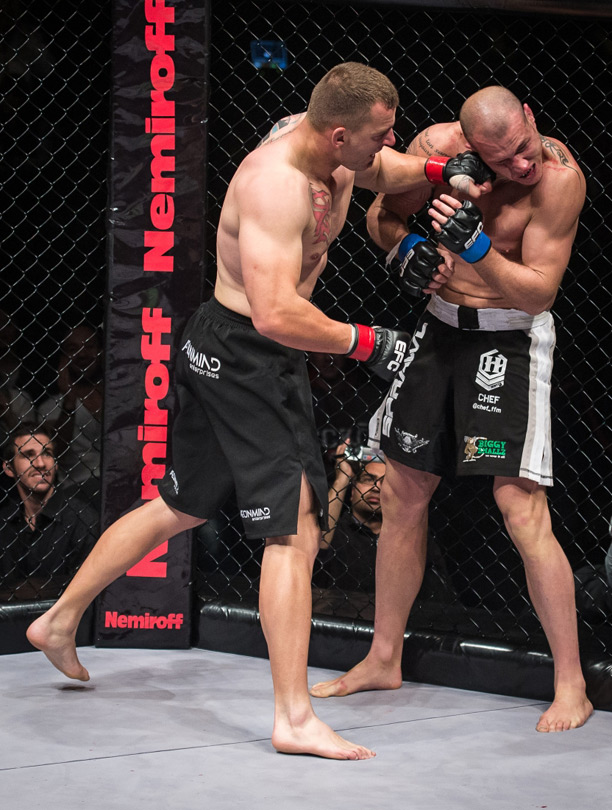 Johannesburg (South Africa) – EFC AFRICA history was made as JP Joubert became the promotion’s first light heavyweight champion in the incredible main event of EFC AFRICA 15. In a blistering display of skill and aggression, Joubert landed a barrage of hooks and uppercuts to knock out Norman Wessels and secure the title.

The momentous occasion went out across the globe, thanks to national and international television deals, pay-per-view online streaming and Nu Metro cinemas. e.tv broadcast the evening’s three main card bouts across Africa, while a recently signed deal with FIGHT NOW TV saw EFC AFRICA 15 hit the USA, Canada and the Bahamas, live for the first time.

One of the evening’s main highlights was the middleweight clash between Darren Daniel and Tyron Rightford. After roughly two years out of action, Daniel made a massively successful return to the hexagon by defeating Tyron Rightford in the second round of their hype-heavy bout. After weeks of online insults and a heated weigh-in, Daniel proved to be the more potent athlete by smashing his way to a TKO.

Welterweight rivals Martin ‘The Punisher’ van Staden and Dino ‘The Lion’ Bagattin made good on their promise to throw heavy leather! Van Staden riled his opponent by waking out to The Lion Sleeps Tonight, and almost made it a reality in the third round of their bout. Great boxing exchanges gave way to a ground tussle and it was van Staden who managed to sink in a choke, forcing Bagattin to submit or lose consciousness.

Leon Mynhardt surprised pundits with his well-rounded attack plan. Considered primarily a striker, Mynhardt managed to beat submission specialist Alex Cheboub at his own game. The tenacious lightweight cinched up a guillotine choke in the opening moments of round two, and now looks toward challenging current champion Costa Ioannou for the most coveted belt on the continent.

EFC AFRICA returns to Carnival City on 19 October for EFC AFRICA 16. Tickets on sale at Computicket www.computicket.com and tickets for the live broadcast to Nu Metro Cinemas available at www.numetro.co.za The three main card bouts will be broadcast live across Africa on e.tv, starting at 22h40 CAT.