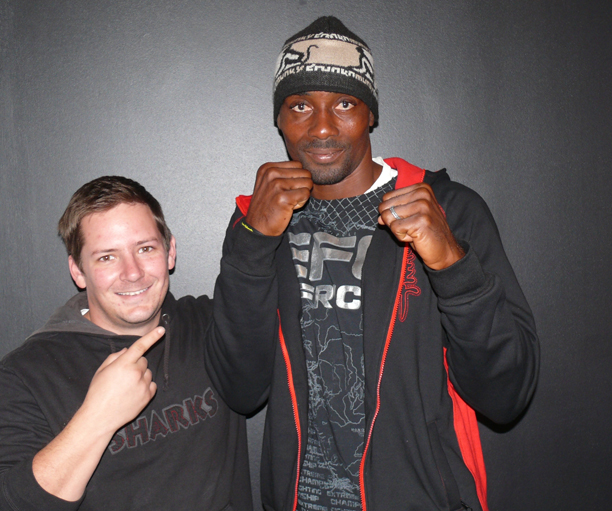 Johannesburg (South Africa) – Popular Nigerian MMA athlete Raymond Ahana has arrived in South Africa ahead of his bout at EFC AFRICA 15 on 27 July. Ahana touched down on SA soil on Friday 13 July and is putting the finishing touches on his fight preparation.

“I’m really excited to be fighting in South Africa again,” says Ahana. “I really like competing here and can’t wait to get in the cage and do my thing! The hard work is almost behind me but I still have time for a few more tough sessions thanks to Leron Myles and Steven Castle at Top Box and also Wade Henderson. Wade is an EFC fighter himself so he knows exactly what is needed in the cage, especially when it comes to grappling. I can’t thank my manager, Stephen van Wyk, enough, as well as Dani Ribeiro, Dave da Costa, MMA Wear and Mi Vami for helping on this trip.”

Ahana faces Jason Culverwell, a light heavyweight prospect from Richard’s Bay, in one of the evening’s main card bouts. The clash will be televised live on e.tv, throughout Africa, from 10.40pm. In his last EFC AFRICA bout, Ahana won with a devastating head kick.
“Jason comes from a kickboxing background and I think he is going to rely on that too much. If he thinks that’s all he’ll need against me he’s got the wrong idea because I have more professional MMA fights behind me and more rounded skills.”

Ahana would like to thank all his supporters for their messages of encouragement and says he won’t disappoint on fight night.
“I’m so grateful to all my fans. I’ve had so much support and loads of friend requests on Facebook, especially from South African fans saying they want to meet me. Please, get tickets for the event and come to Carnival City on 27 July. I promise I’ll make it worth it!”