Another Heavyweight Clash At EFC AFRICA 16 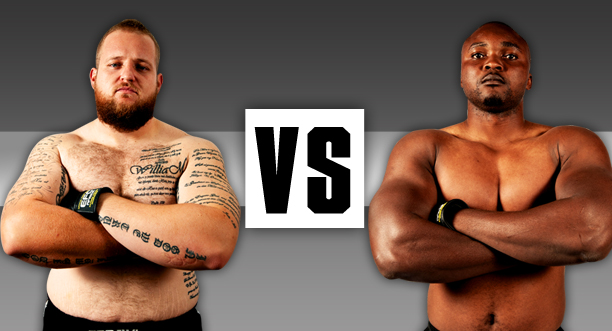 Strauss first competed in EFC AFRICA’s one and only super heavyweight bout, where he lost by TKO in round one. He’s now back and in better shape, ready to prove that he can throw his weight around with the best at heavyweight.
“My weight has come down from over 150kg to 138kg in the last 10 weeks, so I have to lose about another 10kg in the next 8 weeks, and then cut water to get to 120kg. It was tough to shed weight in the beginning, but now I’ve got a rhythm going so it doesn’t even feel like a weight cut, it’s just another normal day of training and eating. For example, today’s diet was yoghurt and protein shake, another shake, chicken and rice, another shake, fish and salad, and a final yoghurt with slow release protein before bed. Training is going very well six days a week and includes boxing, BJJ and conditioning. Right now I’ve set up in a Virgin Active in Meyersdal, so it’s a bit different, but it’s intense.”

According to Strauss, his main objective is to test the heavyweight division’s striking skills.
“I’ll be honest; I’m looking forward to being back at EFC AFRICA so that I can hurt people.
If I get my way, Ricky’s getting knocked out in the first 10 seconds. We’re similar because we’re both boxers that like to brawl. Ricky’s a strong striker and he hits hard, but I’m a Dutchman, I can take it.”
Misholas made his entrance at EFC AFRICA 12 with a stunning KO victory, but then found himself on the receiving end of a flurry of heavy punches at EFC AFRICA13. He hopes to rebound from the recent loss with a solid win against a much bigger opponent.
“In my last fight I was super fit, but took my opponent lightly, made a mistake with my movement and paid the price. I want to work my way to a title shot and I won’t leave without a win when I fight Tiny. I know him personally, he’s a good guy and he can stand up for himself. He lost his first EFC fight, but that doesn’t make me think he’s a bad fighter. I know how it is to train hard, then make one small mistake and lose a fight. We are both coming from a loss, and I know neither of us want to lose again. I know Tiny weighs a lot more than me, I’ll be about 105kg, he’ll be 120kg, but that doesn’t bother me. I know about it and I’m preparing for it, so expect a hell of a fight because my fists are fully loaded!”