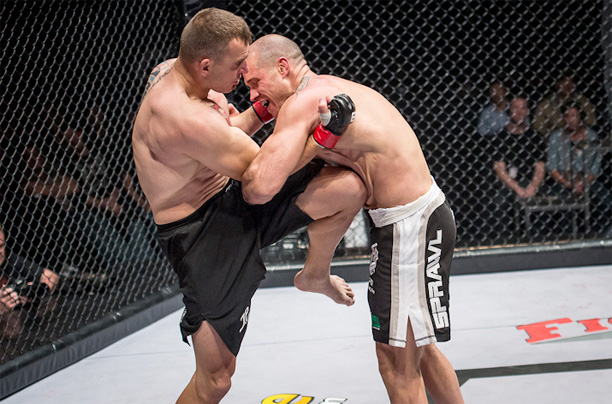 Johannesburg (South Africa) – On 27 July, JP ‘The Bull’ Joubert became EFC AFRICA’s first light heavyweight champion by knocking out Norman ‘Chef’ Wessels at EFC AFRICA 15. The main event of the evening was a nail-biting affair and possibly EFC AFRICA’s most astounding turnaround ever. In round one, Joubert was mercilessly pounded by Norman Wessels, and seemed only moments from a TKO loss.

“I had a massive adrenaline dump in round one and lost just about all my energy,” says Joubert. “I was also surprised by Norman’s power; he was way stronger than I’d expected and he dominated me, which is something that never happens! The guys that I train with are serious athletes with massive accomplishments behind them and they never dominate me like that, so for Norman to have that sort of strength was a shock.”

Half way through round two, Joubert turned the tables and delivered a shock of his own, a hail of hooks and uppercuts that put Wessels on the defensive.
“In round two I started to regain my energy and strength. I was able to regroup and I kept telling myself that I was still in the fight and that there was no way I was going to give up. As soon as I started landing a couple of shots, and as soon as I saw that Norman was tired too, I felt things starting to turn in my favour. If I can compare it to anything, it was like hooking a fish; I knew I’d hooked Norman and I just had to keep swinging or he was going to get away. A fight comes down to who can take the most and who can give the most. It’s not about how you start, but how you finish.”

Before the bout, Joubert made the eccentric claim that he was going to ruin Wessels’ life. According to Joubert, even though the fight is over, his feelings toward his opponent and his team haven’t changed too much.
“My feelings toward Fight Fit Militia are not good feelings. Now that that I’ve stepped out of anonymity I have a voice and I can say that it doesn’t matter how many achievements they’ve got, at the end of the day I don’t see them as good sportsmen.”

According to Joubert, earning an EFC AFRICA title was a massive achievement because all the hard work and dedication in training paid off, especially since he’s not a full-time athlete.
“It was a victory for me and my team because so many people and training partners were involved. It was especially great to see that a normal guy like me could pull off something so huge. Even though I put a hell of a lot of time into MMA, for me it’s still a hobby.”

The price of victory was high. During the bout, Joubert suffered a depression fracture to his skull, yet still managed to fight on and ultimately win. Health permitting, he hopes to be back to defend his title soon.
“I’m still waiting to hear the final doctor’s verdict but it looks like I have surgery to look forward to, and it’s not a small procedure. The fracture was definitely from the elbows that I took, and in my opinion elbows should be banned from MMA. I can’t train for at least 6 weeks and it’ll be a few months before my skull heals properly. Was it worth it? All I can say is MMA is in my blood, it’s the sport I chose and I want to continue.”

EFC AFRICA 16, presented by MusclePharm, takes place at the Carnival City Big Top Arena on 19 October. Tickets on sale at Computicket www.computicket.com and tickets for the live broadcast to Nu Metro Cinemas available at www.numetro.co.za. The three main card bouts will be broadcast live across Africa on e.tv, starting at 22h40 CAT.