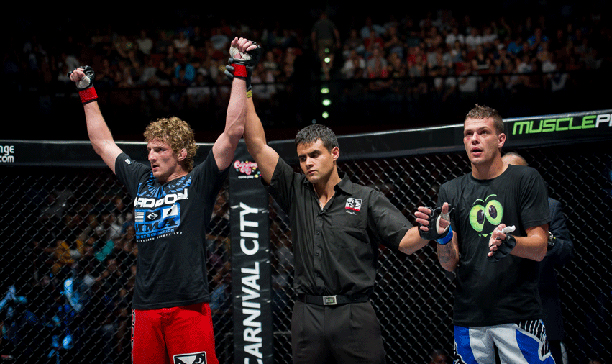 Johannesburg (South Africa) – Welterweight title challenger Michiel Opperman is now eight weeks away from his impending championship battle at EFC AFRICA 16, and promises to stop at nothing to take away Jadyson Costa’s belt and put it around the waist of a South African.

The 28-year-old chiropractor from Pretoria has been hard at work for months, perfecting his skills and strategy for dealing with his crafty Brazilian opponent.
“Everything is on track so far. Right now I’m a slave to a hectic schedule, but I’m extremely confident in my coaches so I just do whatever they tell me. I’m also confident about victory when I face Jadyson. I believe 90% of confidence depends on preparation, and preparation is going very well.”

Opperman’s extensive striking achievements include SA colours in kyokushin full contact karate as well as the SA super heavyweight K1 kickboxing title. Since progressing to MMA, he has expanded his skill set, getting to grips with grappling and wrestling. He has since become a choke specialist, winning all three of his EFC AFRICA bouts so far by submission. He has also entered numerous grappling competitions, and most recently secured a first place win over grappling virtuoso and former EFC AFRICA welterweight champion Adam Speechly, again by way of choke.

When Opperman clashes with Costa on 19 October, he hopes to give and receive punishment in a battle that will go down in history.
“I have one goal for this fight: knock out Jadyson Costa! I’m not very interested in where he trains, how long he trains or who he is. I have a job to do and all my focus is going into that. I am 100% focused on myself and my game, everything else is irrelevant! I just hope that when my job is done, we both have some battle scars.”