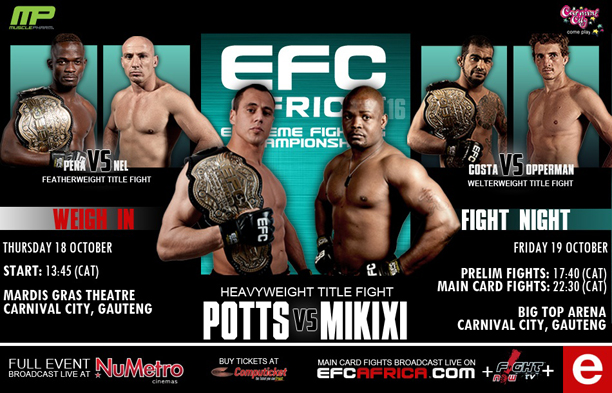 At heavyweight, champion Ruan ‘Fangzz’ Potts will attempt to defend his title against Angolan wrecking machine Bernardo ‘Black Panther’ Mikixi. Potts is undefeated and already has one successful title defence under his belt. However, Mikixi has been on a rampage this year with two first round TKO victories, and he promises to bring even more destructive force to his title challenge.

EFC AFRICA 16, presented by MusclePharm, takes place at the Carnival City Big Top Arena on 19 October. Tickets on sale now at Computicket www.computicket.com and tickets for the live broadcast to Nu Metro Cinemas available soon at www.numetro.co.za. The three main card bouts will be broadcast live across Africa on e.tv, starting at 22h30 CAT.