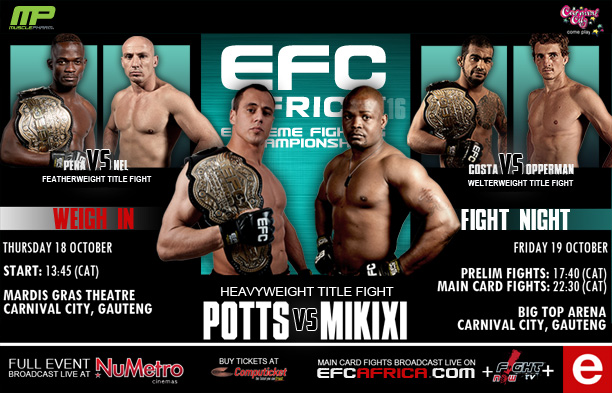 The main event of the evening sees heavyweight champion Ruan ‘Fangzz’ Potts attempt to defend his title against Angolan wrecking machine Bernardo ‘Black Panther’ Mikixi. Potts is undefeated and already has one successful title defence under his belt. However, Mikixi has been on a rampage this year with two first round TKO victories, and he promises to bring even more destructive force to his title challenge.

Other highlights include the heavyweight clash between Wilhelm ‘Tiny’ Strauss and Ricky ‘Apocalypse’ Misholas. Strauss has cut down from super heavyweight and must weigh no more than 120kg when he takes on dangerous striker Misholas, who weighs roughly 106kg. Also at heavyweight, top contender Andrew ‘One Gear’ van Zyl takes on newcomer Ian Visser. Van Zyl has only ever been defeated once, by current champion Ruan Potts, but Visser has stepped up to the challenge and his decorated Thai boxing and wrestling background give him a fighting chance. All this and many more bouts!