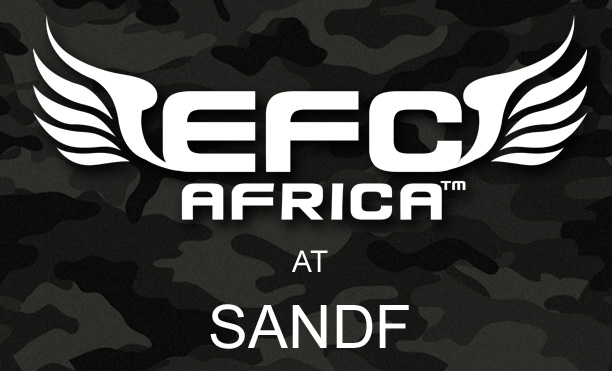 Johannesburg (South Africa) – As some of the fittest athletes in the country, EFC AFRICA athletes have been invited to enter the South African Army Fittest Soldier competition on Tuesday 18 September. EFC AFRICA’s professional mixed martial artists push their bodies to the limits in rigorous training activities each day, and now they have the opportunity to see how they match up against the South African National Defence Force’s (SANDF) elite soldiers.

According to Communication Support Officer, Major Merle Meyer, the SA Army Fittest Soldier Competition is an annual competition aimed at improving the fitness standard of members of the SA Army.
“Members compete in various categories and in teams, and the SA Army would be honoured if members of the Extreme Fighting Championship would compete with SA Army soldiers.”

The EFC AFRICA team is the only civilian team that has been invited to the event. According to EFC AFRICA President, Cairo Howarth, this is another step towards integrating MMA into the SANDF. “This opportunity has come about through our on-going work with the SANDF, and it’s a great opportunity for EFC AFRICA athletes and SA Army soldiers to push each other’s athletic performance. We are confident that our athletes will represent themselves and EFC AFRICA well at this prestigious event.”

The SA Army Fittest Soldier Competition runs from 17 to 21 September at the SA Army Gymnasium in Heidelberg. More than 300 competitors (40 units and 9 HQ teams) as well as a number of senior soldiers have been invited to participate in the competition. The schedule of events on 18 September, when EFC AFRICA athletes will compete, is as follows:
• Opening parade
• Training surprise
• Agility test
• Bleep test
• Pool crossing event
• Weigh-in of back packs
• Flower ceremony and prize-giving