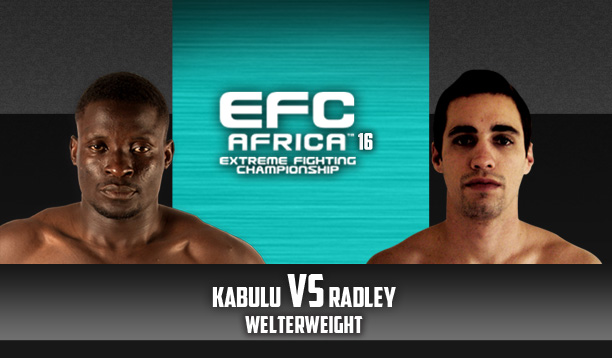 Radley comes from a Muay Thai and K1 kickboxing background, and runs his own Muay Thai gym, Thaiholics, in Milnerton. The 27-year-old made his pro K1 debut in Germany in 2011, defeating the vastly more experienced Sammy Masa by TKO. Radley began practising MMA in 2009 and trains at Pride Fighting Academy under Mike Mouneimne and EFC AFRICA welterweight champion and Brazilian Jiu-Jitsu expert Jadyson Costa.

Francois ‘The Frenchman’ Kabulu, originally from DRC, is already one of EFC AFRICA’s most experienced athletes, having fought at seven EFC AFRICA events. He holds a professional record of 7 wins, 3 losses, and has won his last two bouts by unanimous judges’ decision after three rounds. Kabulu is known for his resilience and is a definite force in the welterweight division, making him a tough test for Radley on his debut.