Van Zyl VS Visser, Lamprecht VS Sinclair At EFC AFRICA 16 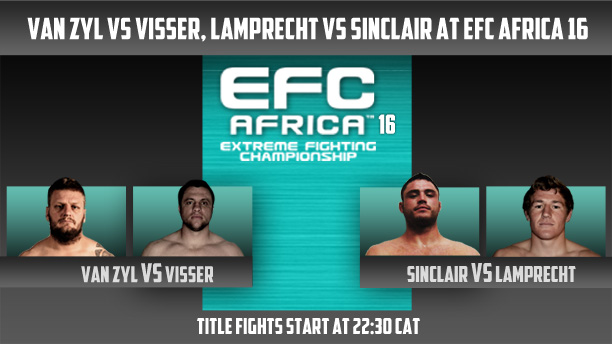 At heavyweight, Johannesburg’s Andrew ‘One Gear’ van Zyl takes on Pretoria’s Ian Visser. Van Zyl is a school teacher who has been practising MMA in his free time for more than a decade, while Visser, a businessman with a passion for motorbikes, has decided to put his Thai boxing and wrestling background to the test for his first MMA bout. Van Zyl holds a professional MMA record of 8 wins, 1 loss, and hopes to fight his way back to another title shot with current champion Ruan Potts, the only person to defeat him so far. Visser makes his professional MMA debut after an undefeated run of 8 wins in Thai boxing, plus national colours in wrestling, and hopes to make a name for himself by toppling a top contender.

At welterweight, Durban’s Daniel Sinclair makes his long-awaited return to the hexagon after a year out of action. A music producer when he’s not on a grappling mat, Sinclair was a hot prospect on his professional debut in September 2011, but faltered against Michiel Opperman. After a year spent fixing the holes in his game, Sinclair will face Pretoria’s JC Lamprecht. Lamprecht is a geology student who loves the outdoors, and his 8 win, 0 loss amateur record paved the way for his EFC AFRICA debut in July, when he achieved his first professional win by keylock submission.