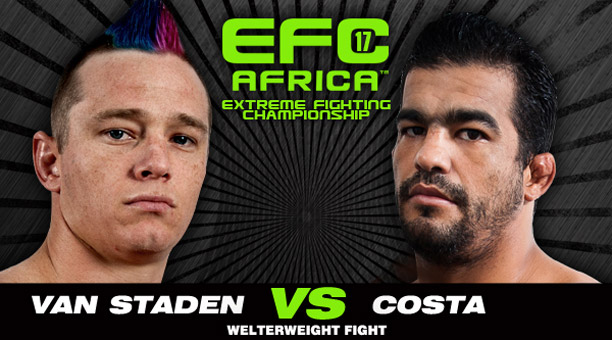 Johannesburg (South Africa) – EFC AFRICA has made the decision not to have Tenyeh Dixon compete in the promotion, as signing Dixon “does not comply with the promotions policy.” Dixon, a US national with parents from Sierra Leone, was recently signed to Africa’s premier MMA promotion, and was due to fight South African welterweight Martin van Staden on 23 November at EFC AFRICA 17.

“Upon closer inspection of Dixon’s details, we realised that our current policy to procure African athletes has been broken by contracting Dixon,” says EFC AFRICA president Cairo Howarth. “Mistakenly we were under the impression that Dixon was born in Sierra Leone, and only after reading his bio two days ago, realised he was born in the US.”

“It is very unfortunate that this misunderstanding happened and we apologise to all involved, especially Mr Dixon,” says Howarth. “Dixon is a great athlete and would have been a fantastic addition to our current roster, and we wish him all the best for his MMA career.”

In the future EFC AFRICA’s policy may change, and may open up to contracting athletes from around the world. “There are so many exciting prospects and future African stars, so we are focusing on scouting Africans living on the continent and abroad,” says Howarth. “Africa has produced plenty of current and future champions and we are committed to continue to grow MMA on the continent.”

Martin van Staden will now face former welterweight champion Jadyson Costa on 23 November. Costa, a Brazilian who moved to Cape Town and is a head trainer at PFA, recently lost his title and wants to get another crack at the belt. Both Van Staden and Costa are considered top contenders in the division, and this bout will place the winner in the front of the contender line-up.

“Costa is a prime example of someone with a shared vision,” says Howarth. “He has moved to Africa and shares his skills and experience, bettering MMA on the continent.”