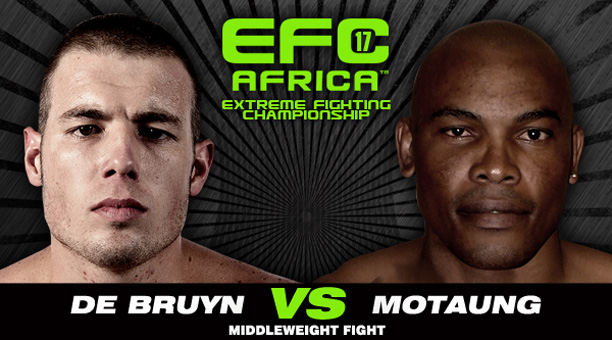 Judo champion De Bruyn, who was on a three fight winning streak until EFC AFRICA 15, looks to get back into title contention with a big win. “I am very excited to redeem myself after my loss against ‘Soldier Boy’. I have been training hard and I promise to bring a good fight,” says De Bruyn.

His opponent Pete Motaung, a Muay Thai and kickboxing champion equipped with devastating strikes, is hoping to add a win to his MMA record. “I am feeling very confident. With the help of my trainers and my training team I’m ready in my stand-up and ground game to take on Armand,” says Motaung.

A middleweight clash not to be missed. This match-up plus the other nine prelim bouts are broadcast exclusively to Nu Metro cinemas across South Africa.