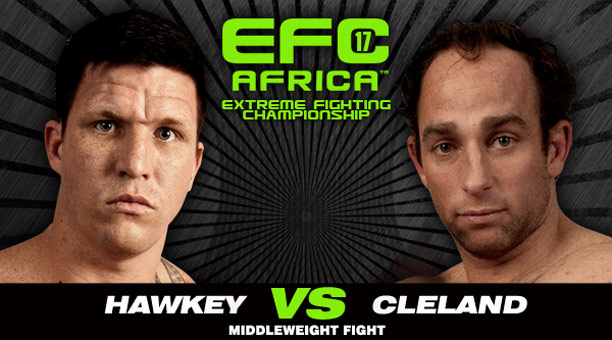 ‘Bam Bamz’, who refers to himself as a “one round specialist” defeated Chett ‘The Threat’ Meyer in his last bout at EFC AFRICA 15 in round one with a guillotine choke. Hawkey comes from a strong boxing background and rates his stand-up game as one of his favorite aspects. “I’m really excited to be competing in EFC AFRICA 17 and I am looking forward to my fight. Liam has a phenomenal ground game and it will definitely be a test for my all-round capabilities. I think fans are going to be in for a skill-filled treat,” says Hawkey.

Cleland, the only person ever to beat the current middleweight champion Jeremy ‘Pitbull’ Smith, is a Jiu-Jitsu specialist and is thoroughly psyched for this middleweight bout against Hawkey. “Don is a good all-rounder and it gives me the opportunity to show the MMA community my set of skills. I am hoping for a win that will put me in line for the title shot in the middleweight division,” says the Johannesburg athlete.