Madge And Britts To Clash At EFC AFRICA 17 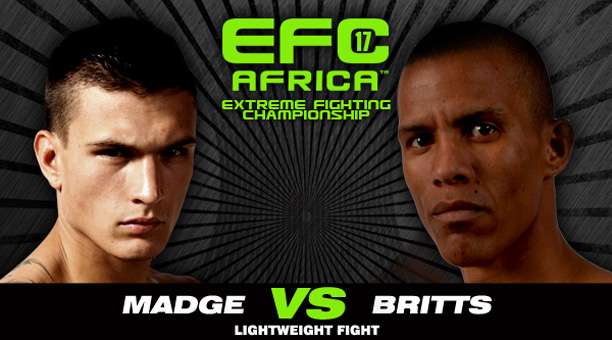 Johannesburg (South Africa) – Yet another exciting lightweight bout has been added to the EFC AFRICA 17 fight card. Don ‘The Magic Man’ Madge (1-1) will battle it out against Hector ‘The Enforcer’ Britts (3-2).

Both athletes are strikers that have made the transition into MMA. Madge combines vast Muay Thai skills and experience with Brazilian Jiu-Jitsu, while Britts has added the other aspects of MMA to his kickboxing base. Madge is remembered by fans for his legendary bout with Leon Mynhardt at EFC AFRICA 13, which many have called the “best fight ever on African soil.”

‘The Magic Man’ is pumped and ready for EFC AFRICA 17. “I feel really good about this fight. My training is going great and I’m excited to test my skills against a new opponent,” says Madge.

Britts, fighting out of Durban, has cut down from welterweight and expects to be stronger and dominate in the lighter weight division.