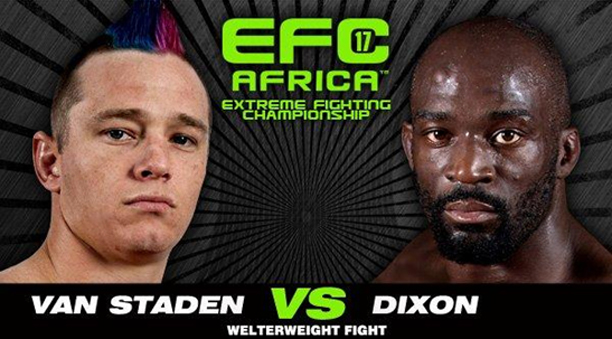 Johannesburg (South Africa) – At EFC AFRICA 17, the last MMA showcase of the year, fans will see the introduction of welterweight Tenyeh ‘Skinnyman’ Dixon, a Sierra Leonean residing in the US, making his EFC AFRICA debut against ground and pounder Martin van Staden.

Born in Brooklyn, NY in 1975, Dixon’s background in karate led him on the path to MMA when he started his training in 2004. After just a year he turned professional in 2005 and holds two welterweight titles in the US, with a professional record of 11-9. A purple belt in Brazilian Jiu-Jitsu has also been the result of Dixon’s hard work throughout the years.

Being a father of five and growing up on the streets of New York since the age of 16 when his parents passed away, Dixon strives to live by the quote “one’s challenges in life is often tied to one’s purpose.” He has coupled his life experience with his desire to assist others, especially the youth, in the development of confidence, discipline and success.

Dixon trains six days per week, two times a day, and concentrates most on sparring and explosive conditioning skills. When he is not training, Dixon also co-owns a gym with his trainer Cordell Hunter where he teaches MMA, dedicating a large portion of his time to teaching children. Dixon is excited about fighting in Africa and looks to go “all the way” and win over the EFC AFRICA fans.

‘Skinnyman’ believes that he is ready for anything when he steps into the hexagon with ‘The Punisher.’