‘The Wolf’ Still The Leader Of The Featherweight Pack 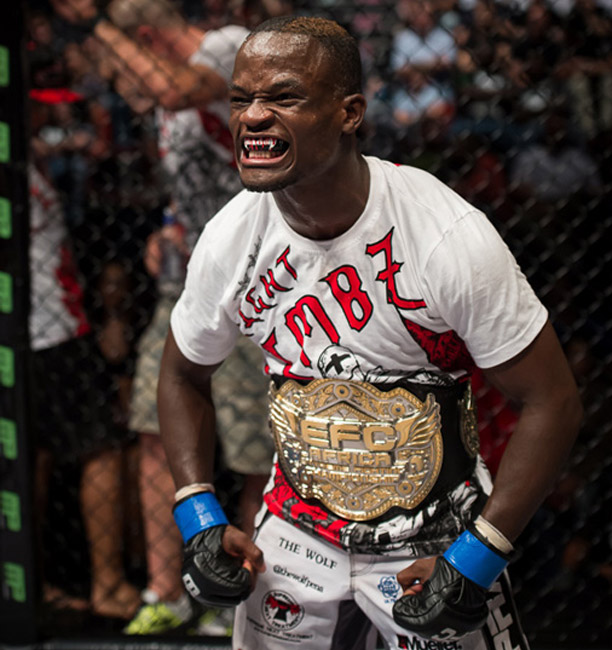 Johannesburg (South Africa) – ‘The Wolf’s’ howls of anticipation could be heard miles away when the build-up to EFC AFRICA 16 got under way. Demarte Pena (5-0) successfully defended his featherweight title on 19 October at Carnival City against Terrence “The Trigger” Griessel, notching another win under the champions belt.

After all five rounds it went to the judges, with Pena taking the win by unanimous decision. But Pena and his trainer planned the exhausting encounter down to the last point. “We knew that Terrence takes his time in fights, and doesn’t apply much pressure. He is durable and has a good ground game. So the plan was to frustrate him in the stand-up and only take him down for points to win the rounds. We expected the fight to go the distance, and we knew we would win it due to his stand-up not being aggressive.”

Pena only had a few weeks to train for a whole new fight against ‘The Trigger.’ The number one contender, Wentzel Nel, had to step aside due to a severely pinched nerve. ‘The Wolf’ looks forward to the day that he will meet Nel in the hexagon. “I don’t think anybody really knows what will happen. There are no guarantees, so honestly anything can happen, but I believe I have what it takes to win that fight,” says Pena.

The 23-year old Muay Thai specialist reckons that every opponent who crosses his MMA path in future will make him a better athlete, and he is more than prepared to take on anyone. “There are a lot of things that inspire me. My family, team, friends, fans and athletes such as Anderson Silva and Jose Aldo are at the top of my list”

A well-deserved holiday is the next thing to occupy the champions diary, but after that he will be back in full training mode anxiously waiting to pounce on his next opponent.